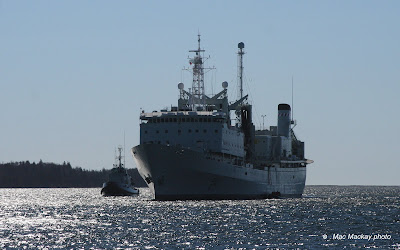 1. The tug Glenevis stands by the Preserver as it returns to port this morning. 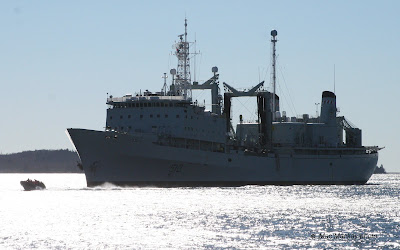 2. A rigid hull inflatable powers away from the ship as part of a personnel transfer. 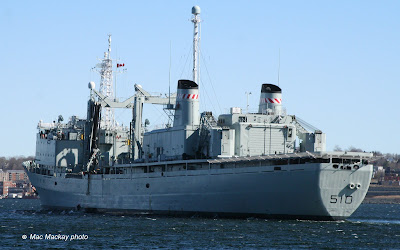 3. Preserver veers to starboard, heading back out to sea.

HMCS Preserver returned from sea this morning (she sailed Tuesday). It was reported in the press that her commanding officer had been relieved of command a few weeks ago in relation to the incident last November when the ship struck the Novadock floating drydock while maneuvering in the harbour.
The ship was laid down at Saint John Dry Dock on October 17, 1967, launched May 29, 1969 and commissioned July 30, 1970. Long overdue for replacement, the ship has provided sterling service to the RCN including participation in the October 2001-April 2002 Arabian Gulf/Afghanistan war.
There is still no final decision on the design of Canada's new naval supply vessels, though it seems a modified German design is currently under consideration. Without some movement quite soon, the three to five year window for Preserver's future may be extended again - maybe she will reach fifty years in commission.