America Express - another oddball for Hapag-Lloyd 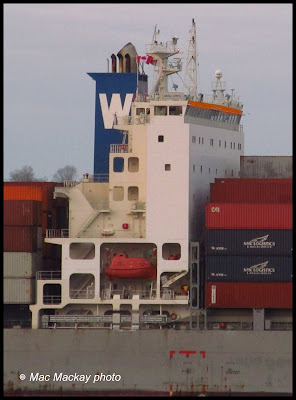 Hapag-Lloyd is bringing in more and more chartered tonnage to Halifax [see Pusan ] and today's arrival is very different from the others.

Built in 2008 by the China Shipbuilding Corp in Kaoshiung, as Wan Hai 510, this ship was renamed last summer as America Express. It has not however been repainted or otherwise identified to Hapag-Lloyd, and still bears the owner's banner on its sides. There large white "W" on a blue funnel is still prominent.
The ship was formerly deployed on the owners' Far East Europe service.

With a capacity of 4,252 TEU it is line for size with other ships on its new Pacific Atlantic Express route.
.
Posted by Mac at 7:36 PM