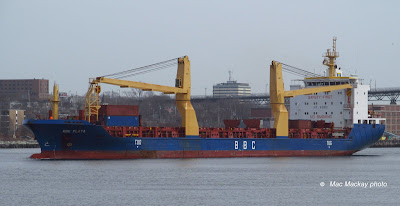 BBC Plata tied up at pier 9A this afternoon, displacing the bulker Atlantic Superior. BBC Plata will load a packed boiler unit at pier 9A and then move to pier 31 to load four more. The boilers arrived on rail cars, and apparently there was no space at pier 31 to accommodate the fifth rail car.
The pier 9C extension project, ongoing nearby will alleviate this situation by providing more room to handle such cargoes.
BBC Plata was built in 2005 (or 2004 according to her owners) as Asian Voyager by Jiangdong Shipyard in Wuhu, China. It flies the flag of Antigua and Barbuda, and is owned by the large Bockstiegel Reederei GmbH of Emden, Germany. It is classed as a multi-purpose ship, capable of carrying 665 TEU, bulk cargoes or heavy lifts and is fitted with two 120 tonne cranes. It is a ship of 9,618 gross tons and 12,780 deadweight. [It is hard to believe that it has greater capacity than a WWII Empire, Fort of Park ship]
The Bockstiegel company has an excellent website, with a fleet list and fleet position map (you will need to download Java for this.)
http://www.reederei-bockstiegel.de/ [press the Union Flag for English]
.
Posted by Mac at 10:04 PM