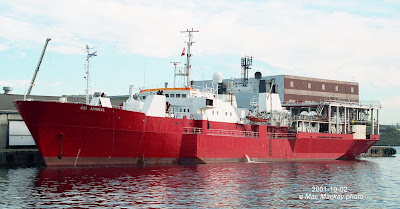 1. GSI Admiral alongside at pier 23, showing the awkward hull sponsons added during her conversion for seismic work.

2. Returning from a wintry mission off Nova Scotia, her low profile would probably make a good sea boat. 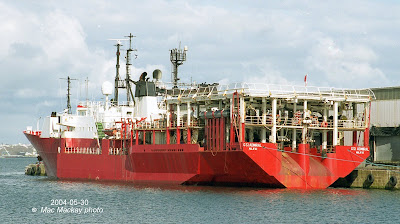 3. The business end of a seismic ship is not its most attractive feature. The ramps allow for deployment and recovery of the streamers, and the housing contains streaming gear, reels for cable storage and other associated equipment.

Marcon International's February offshore survey reports the sale in October 2011 of the Canadian seismic researcher GSI Admiral to Singapore owners.
This interesting ship was originally built in 1976 as a trawler in Gdynia, Poland. Named Salmo, it sailed under the Swedish flag for Rederi AB Transatlantic. In 1979 it was sold to Geophysical Co of Norway (GECO) and converted for seismic work, upping its gross tonnage from 2300 to 2508. It became Geco Alpha. After another sale in 1995 it became Blue Sky I. In 1998 it was sold again and extensively rebuilt as Austral Horizon, measuring 3435 gross tons for Gulf Offshore NS Ltd [NS stood for North Sea, not Nova Scotia].
In 2001 Geophysical Service Canada Ltd bought the ship and it became GSI Admiral. It did find work in Canadian waters for a time, but in recent years it has been largely idle in the Gulf of Mexico. Despite owners objections, foreign ships were brought in to do seismic in Canadian waters. Some of this was apparently due to the sophisticated capabilities of the foreign ships.
GSI Admiral was capable of performing 3D seismic, towing four streamers.
Now renamed Focus Admiralty it flies the flag of Panama. Its Canadian registry was closed in September of 2011.
Posted by Mac at 5:41 PM