Stellanova - end of an era? 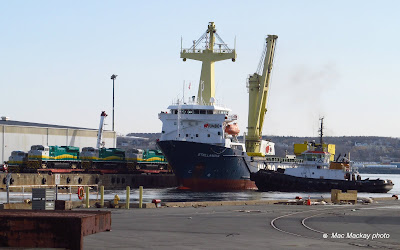 1. Export locomotives for Brazil are lined up on pier 28 as Stellanova makes her approach, under the guidance of Atlantic Larch. 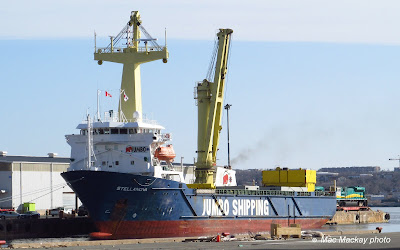 2. The ship is fitted with a 250 tonne derrick forward, and a 250 tonne crane on the port side midships.
The heavy lift ship Stellanova arrived at pier 28 today to load railway locomotives. The ship is fitted with one 250 tonne derrick and one 250 tonne crane, and will be able to load the locos with ease. The ship has made many trips to Canada since it was built in 1996, and locomotives are one of her regular cargoes. However, that may be at an end since Canada's remaining locomotive manufacturer, EMD (Electromotive Diesel) of London, ON, owned by Caterpillar, has announced that it will shut the factory and transfer the work to the US. Once part of General Motors, the factory has produced hundreds of locomotives for export and domestic use. The export units were often shipped through Halifax, although they have also been loaded out of Toronto and Montreal.
The current Stellanova is actually the third ship to carry the name for Jumboships. 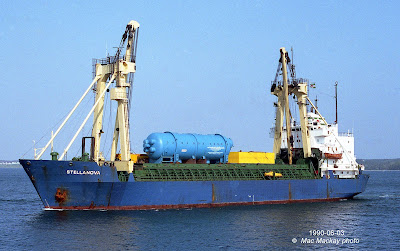 3. The second Stellanova arrives in Halifax with a large pressure vessel on deck.
The second Stellanova was built in France in 1978 as Internavis II, of 4,962 gross tons. It was renamed Jumbo Stellatwo in 1982 when purchased by Jumbo, but renamed Stellanova when the previous ship was sold. It had a pair of 220 tonne derricks. Sold in 1995 it carried the names 95: Gajah Borneo, 01: Persey, 03: Kom, 03: Phenix, 04: Aspenos, 05: Lundeborg, 06: Nord Scan Mumbai. It was broken up in Alang, India in Bebruary 2011. 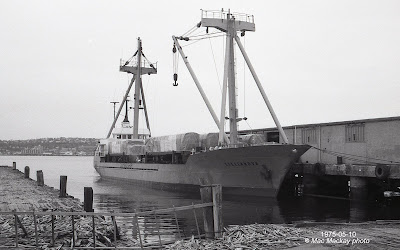 4. The first Stellanova loaded locomotives at pier 9, then moved to Purdy's wharf (a non-union dock, outside the jurisdiction of the ILA) so that the ship's crew could weld down brackets and complete lashings.

Jumbo Shipping's parent, Kahn Shipping Ltd of the Netherlands, despite intense competition for heavy lift work, continues to be favoured for sensitive project cargoes, but we may see fewer of its ships if this is the end of the locomotive business.
.
Posted by Mac at 4:19 PM