Atlantic Superior - on the move, but not far

1. Atlantic Superior being turned in the Narrows by tugs as she gets away form pier 9A. 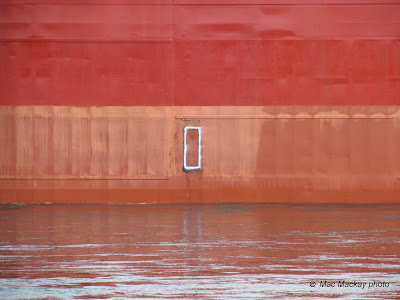 2. One of three locations on the port side where hull plating was cut out and welded back in. The white line was painted on before the cut as a guideline.

3. Taking up all available room in the Narrows.

Atlantic Superior moved from pier 9A to pier 25-26 this afternoon after several false starts yesterday (she was scheduled to move, but didn't) and earlier this morning.
The move was carried out entirely by tugs, as she was not using her main engine.
Her refit is apparently not complete, as there is some paint work needed where openings have been made in her hull. Men were also working on her self-unloading gear.
The move was hastened by the arrival of BBC Plata which tied up at pier 9A a few minutes later. [see following post]