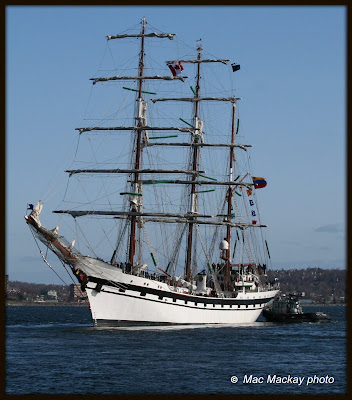 1. The navy tug Merrickville assists in swinging the stern of the Simon Bolivar as it clears the Cable Wharf. Tug Granville also assisted.

The Venezuelan navy training barque Simon Bolivar got underway for sea this morning in winds of more than 25 knots, gusting to 40 knots. These would be ideal conditions for open water sailing (despite cold temperatures) but there was no sail used in the confines of the harbour.
During the one week visit, the Bolivar was tied up at the Cable Wharf, and not within HMC Dockyard, but as a guest of the navy it was provided with naval tugs for departure.
Built in Bilbao, Spain in 1979, it is one of four similar vessels used by Mexico, Colombia and Ecuador. At 270 feet (length of hull) it carries 1650m2 of sail and displaces 1260 tonnes.