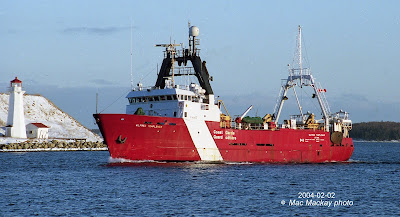 The research trawler CCGS Wilfred Templeman has been sold and renamed. Built by Ferguson Industries Ltd in Pictou in 1981, it was one of two such vessels constructed for the Department of Fisheries & Oceans. Sister ship Alfred Needler is stationed at Bedford Institute in Halifax and Wilfred Templeman in St.John's.
When the Coast Guard was merged into DFO, the ships lost their grey hulls and went to CCG red, and added some other duties to their repertoires, such as search and rescue, when needed.
The Templeman was built to replace the A.T.Cameron (which often visited Halifax). 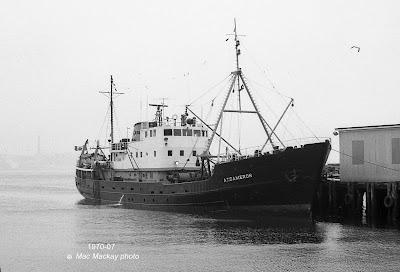 The Templeton lead a fairly uneventful career with DFO compared to its sister, and in fact was called in to BIO in 2003 following a serious fire on the Needler, and was brought back in 2007 when the Needler was in transitional refit. The Templeman never received a similar refit, and so its career has proven shorter.

Oddly however, its twin Alco/MLW engines were given a rebuild in 2009, and the ship was withdrawn from service with only 30 hours on the rebuild, in September 2009. [Those engines were originally troublesome and kept the ship out of service well in to 1982, and extended the service of the A.T.Cameron, which had been renamed 81-4 pending disposal].
By July of 2011, the Templeman had been renamed 2011-01 and was advertised for sale, with an asking price of $400,000. There were no takers for that price, and the sale was extended to September. The successful bidder was McKeil Work Boats Ltd of Hamilton, ON for $371,956.55.
The ship was registered on March 20, 2012 as Blain M, named for a member of the McKeil family.
Better known for their tug and barge work, McKeil have owned research ships in the past, and perhaps they see an opportunity for this one in Newfoundand or Nova Scotia waters. Or perhpas farther afield. Predeccesor A.T.Cameron when it was sold in 1984 became Arctic Ranger for Newfoundland owners and in 1992 became Arctic Discoverer for Caribbean treasure hunters.

Footnote: Dr. Wilfred Templeman was a distinguished marine biologist and when the ship was named, it was the first time that a DFO ship had been named for a living scientist.
.
Posted by Mac at 4:29 PM