Wit the closing of the St.Lawrence Seaway on December 29, we can expect a slight in crease in cargo activity in Halifax, but it is rare to see two lakes ships arriving and tying up at adjacent berths.
Algoma Mariner was first to arrive on December 29 and tied up at pier 27-28. Today she could be seen loading grain. This may well be the first time that a Laker has loaded grain in Halifax. Normally they bring grain in and take gypsum out. 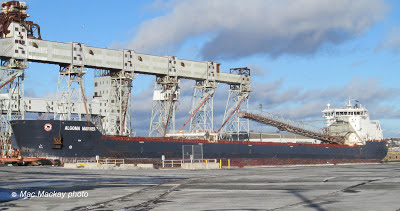 1. Algoma Mariner has her unloading boom raised slightly to allow access to her hatches. One grain spout is till working up forward, but the other spouts have been stowed at the end of the work day, before the holiday.
Algoma Mariner was built to Seaway dimensions, but she is also capable of going to sea as well, so perhaps her owners have decided to keep her busy this winter working on the coast.The ship was completed in 2011 by Chengxi Shipyard in China. Her forebody was built in 2010 to be attached to the reconditioned stern of the laker Algoport. However that ship sank in tow en route to China and the new stern section, including engines, accommodations and some self-unloading gear was built and attached in 2011.
The ship had delivered a load of coal from the Lakes to Sydney, NS, before arriving here.

Second ship to arrive on December 29 was the well known Atlantic Superior. She arrived and berthed stern in at pier 25-26 for winter layup. 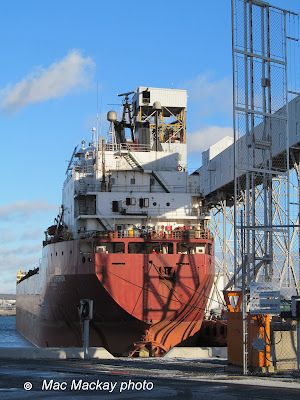 2. Crew members set out 'hurricane' moorings, extra lines that are normally not used for ordinary port calls but which would be sufficient for any expected weather conditions when the ship does not have a full crew aboard.

Last winter she spent almost a month in the Novadock for refit, so this year's winter layup will likely not involve a drydocking. Built in 1982 and modified in 1983 she worked under the Bahamas flag as M.H.Baker III from 1997 to 2003. She has also traveled widely including Europe and the far east, again under foreign flag form 2006 to 2010.
Winter layup is a bit of a misnomer, but is a term generally used when Great Lakes ships remain tied up for the winter. The deck crew is normally paid off, but some engineering staff are kept aboard to carry out necessary maintenance. During the eight month St.Lawrence Seaway season the ships want to cram as many sailing days in as they can and do not stop for maintenance unless essential. A lot of other work is carried on in winter months.