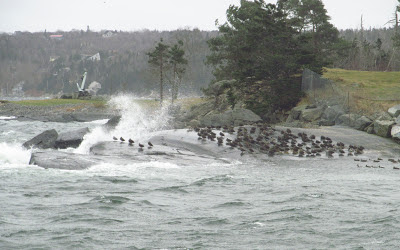 The port of Halifax is essentially shut down for arrivals and departures to sea this evening as high winds, with gusts of 40 knots make embarking and disembarking pilots too dangerous. Large ships in those conditions are also difficult to handle adding to the dangers of attempting to sail.
Two ships are directly impacted. The auotcarrier Don Juan is moored at Autoport and will remain there until it is deemed safe to sail, which may not be until morning.


2. OOCL California arriving in a stiff breeze this morning.

OOCL California arrived this morning at Fairview Cove and completed cargo operations early this evening. It will not be sailing until conditions improve. However it is on weather watch and may have to move to anchor in Bedford Basin if it is unable to remain alongside safely. This will mean that tugs will have to be called out, possibly to stand by the ship if lines start to part or to take the ship off the berth.
Indirectly impacted is the bunkering tanker Algoma Dartmouth which moved up to Pier 9B this evening instead of returning to its usual berth at Pier 34. With a large swell running and easterly winds, -Pier 34 would not be a safe mooring.
Two other ships effected are coastal tankers.Algonova was at anchor and went into berth at Imperial Oil this evening when Algoscotia went to anchor in the harbour. These tankers are self-piloted - the masters have pilotage certificates- and so could sail without the dangers of disembarking a pilot, however cross winds would make an outbound passage a little risky and they will remain in harbour for the time being.
Also weather related was the arrival of the tug Craig Trans - see Tugfax for more on this tug.
Fortunately for all, temperatures stubbornly remain above freezing, so there is no snow predicted  in Halifax, which will be one of the warmest places in Canada. Some inland portions of the country anticpate record snow falls.
Posted by Mac at 8:59 PM