As usual the port was very quiet on Christmas Day and Boxing Day.

On Christmas Eve, the last ship to leave port was Hollandia. It sailed for Grande Anse, QC:

On Christmas Day itself, the St-Pierre et Miquelon feeder Fusion sailed from anchorage in Bedford Basin, to arrive at St-Pierre tonight.
And today the RoRo ASL Sanderling made a rare mid-day arrival for Autoport:

Remaining in port over the holiday were three foreign flag ships. The tug Craig Trans still detained for deficiencies, the cable ship IT Interceptor standing by at pier 9 and the container ship Renate Schulte. Crews from Dominion Diving have been working at the bow of the ship since before Christmas. The ship was moved end for end at pier 36 on the 24th to give them some more shelter. The ship has also been ballasted down by the stern and to the starboard.  I am assuming this is to give better access to the bow thruster, which is the likely source of the problem. 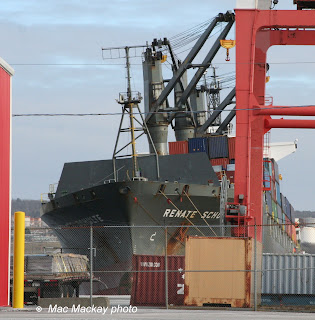 The ship's position makes photography somewhat awkward. Not visible is Dominion Diving's tug/workboat Roseway tucked in under the bow.