1. Saudi Abha dwarfs the tug Point Halifax while arriving in 1995.

I am reliably informed that we have seen the last of the container ship Saudi Abha. Its December 10 visit  was the final one in a lengthy history with the National Shipping Company of Saudi Arabia. The line was founded in 1979 and the ships have been calling here since the early days.
The company, which appears to be rebranding itself as "Bahri ", is expecting imminent delivery of the first of four (with an option for two more) modern RoRo container ships. Designed by Knud E. Hansen of Denmark, they carry a modest 364 TEU of containers, have two heavy lift cranes, and provide large RoRo space amounting to 24,000m2 on several decks. Deadweight tonnage will be in the 26,000 range. They will be 222m loa, 32.3m breadth and maximum 9.5m draft. Delivery of the first of the $100mn ships from Hyundai Mipo Dockyard Co in South Korea is expected any time now.
Saudi Abha, name ship of the four ship class currently working for NSCSA, was built in 1982 by Kockums AB of Malmo, Sweden. A ship of 44,171 gross, 42,600 deadweight, it has a 2310 TEU capacity and can carry 534 cars. The car decks are served by a massive 400 tonne capacity stern ramp, 49.3m long x 12m wide. The ship's dimensions are 248.72m loa x 32.31 breadth x 11.14m draft.
The other four ships Saudi Diryah (1982), Saudi Tabuk (1983) and Saudi Hofuf (1983) will be retired as the new ships come on line, likely quarterly.
For a look at the new ships, see Knud E. Hansen's web site: http://www.knudehansen.com/News/News-from-the-Company/Mar-15-2011/
But also look at NSCSA's own website for the rebranded Bahri look (which will not appear on the present ships, despite the artists impression): http://www.bahri.sa/home 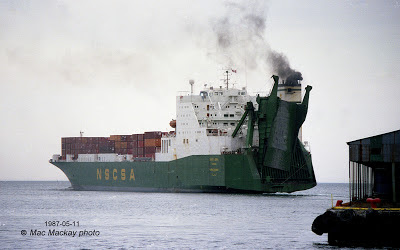