Samuel Plimsoll - a name to reckon with

Samuel Plimsoll was an expert on the subject of shipping coal. Born in Bristol, England in 1824, he was horrified by the loss of life resulting from unsafe loading practices on so called "coffin ships" . He began to campaign for safer conditions for seafarers and was elected to the British Parliament. Despite many setbacks he was ultimately successful in seeing legislation that established regulations to, among other things, define the maximum loads that could be carried by individual ships.
Initially it was the British Board of Trade, but it is now all classification societies (such as Lloyd's Register, the American Bureua of Shipping, Det Norske Veritas, etc.,) that calculate that safe load, and thus establish the minimum freeboard for each ship. On each ship, marked amidships, at the loaded waterline, is a symbol and "log" which shows the safe freeboard in various sea conditions (Winter North Atlantic being the most restrictive) both in salt and fresh water, summer and winter.
Plimsoll also fought for the rights of seamen to refuse duty if they were placed in unsafe conditions. Until his time, signed-on sailors would be jailed for refusing duty. Plimsoll had to fight powerful shipowning forces in Parliament to get the reforms through, and he won the enmity of many. Some owners protested by painting the Plimsoll mark, as it came to be known, on the funnels of their ships as a form of protest. Fortunately Plimsoll's ideas prevailed and still today, more 120 years later, Plimsoll Marks are found on every seagoing ship. Inspection authorities refuse a ship permission to go to sea if it does not have a valid "load line" (i.e. a Plimsoll Mark and corresponding certificate).
The bulker Alpha now in port to load grain, is operated by a company called Load Line Marine. Their company's funnel mark is a version of the Plimsoll Mark (not as a form of protest, I hope). 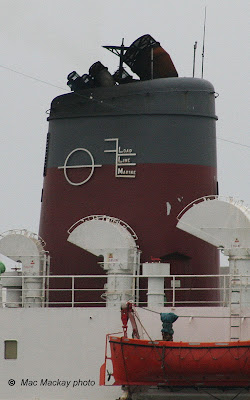 Here is a typical Plimsoll Mark found amidships on a loaded ship: 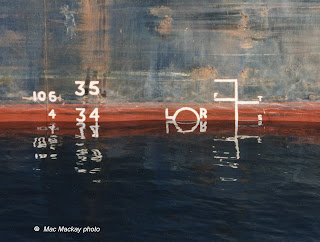 To the left is the ship's draft, in imperial and metric. (This ship is drawing exactly 34 feet of water)
In the centre is the Plimsoll Mark, a 12 inch diameter disc, with 18 inch long horizontal line, marking the ships loaded waterline in summer conditions. The letters L R represent Lloyd's Register, the ship's classification society, which assigned the load line while the ship was under construction.
To the right is a log representing various sea conditions. The bars to the left represent fresh water. The top bar should read TF for Tropical Fresh water (it has been obliterated and should be repainted) and below it F for fresh water.
The right facing bars read from top to bottom: T for Tropical, S for summer (the photo was taken in summer, and the ship is loaded accordingly). Below these and not visible, are W for Winter and WNA for Winter North Atlantic. Had this picture been taken in winter, it would have a foot or two of additional freeboard for safety purposes.
The allowable draft / freeboard of course has an effect on the amount of cargo a ship can carry, so its deadweight tonnage (the weight in  tonnes of cargo, stores, fuel, crew and passengers) will vary with draft / freeboard.
On this blog, when a ship's deadweight tonnage is noted, it is in summer conditions.
Posted by Mac at 2:44 PM