Weather watch continued - for some

Halifax Harbour remains closed to ship movements this evening due to high winds. The Atlantic Pilotage Authority did venture out once in the morning for Maersk Palermo for Halterm and again late afternoon to board the car carrier Noble Ace at about 1700 hrs AST, and it docked at Autoport. However as of 1730hrs the weather watch was re-instated and will not be revisited until tomorrow morning.
That did not mean that there was no activity: 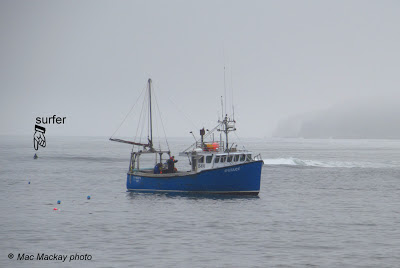 1. The lobstermen on Oralee were busy tending to traps close in to Point Pleasant Park. They did have  to keep an eye open for the odd surfer trying to catch The Big One, but otherwise it was quite calm.

2. The bunkering tanker Algoma Dartmouth returned to her home base at Pier 34 after two days at pier 9A where there was no swell and better shelter.
﻿

And of course the RCN did not have to worry about boarding pilots, so HMCS Toronto was able to run the dynamic sound range by steaming in and out at a pretty good clip too. It involved some fairly hairy high speed turns in the Number One anchorage area.﻿ The great advantage of doing this work today was that there was no other shipping on the area to mess up the ship's sound signature.

3. Starting an outbound run.
4. Returning inbound and reducing speed a bit,
5. Making the turn for another outbound run.
Divers were also working on the bow of the container shipRenate Schulte at pier 37, and by aftenoon the sun was shining brightly.
Posted by Mac at 11:25 PM