Greek Tankers in the Basin and at Imperial

Two Greek owned tankers are anchored adjacent to each other in the Bedford Basin, and a third is tied up at Imperial Oil.

Ajax first arrived March 9 (see March 13). After a visit to Imperial Oil March 15 it sailed for Sept Iles, QC March 16. It returned here March 28 and has been anchored ever since. It appears to be in ballast, so is likely awaiting orders. 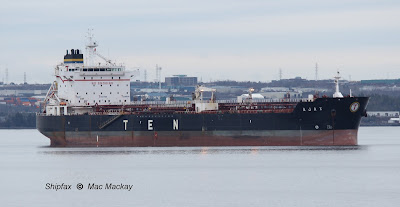 As well as the usual cautionary "No Smoking" on the superstructure Ajax also displays the words "Trust", 'Tradition" and "Teamwork".

The ship flies the Bahamas flag for Tsakos Energy Navigation (TEN) of Athens.

Last night  the very new tanker Elka Elefsis arrived at anchor. The ship was built in 2015 by STX Offshore + Shipbuilding of Jinhae, South Korea and comes in at 31,905 grt, 49,990 dwt. 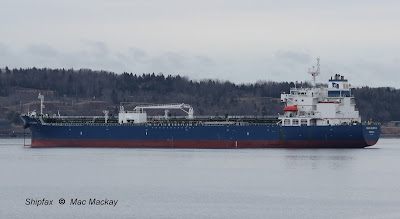 It flies the Liberian flag for European Product Tankers Ltd of Athens. It was destined for number 4 dock at Imperial Oil but diverted to anchorage.

Meanwhile at number 3 oil dock at Imperial, the Isle of Man flagged tanker Energy Patriot may be sailing tomorrow. It arrived March 30, also on its second trip this year. It was in for the first time February 16 when it anchored in the Basin until the 17th, unloaded at Imperial and sailed the 21st.

Also built in Korea, but by Sundong, Tongyeong, it is slightly smaller at 29,605 grt, 46,606 dwt. It is owned by Enterprises Shipping + Trading of Athens and operated by Golden Energy Ship Management.