Sun and Moon in Halifax

Sun and Moon appeared in Halifax today - at opposite ends of the harbour. 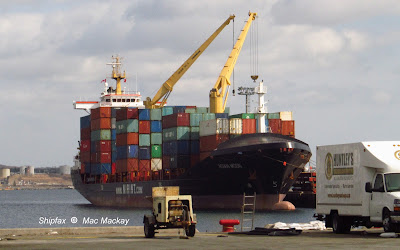 This morning the Asian Moon made its first appearance for Nirint Lines when it berthed at pier 30. Dating from 2006, it is a product of Jiangdong Shipbuilding in Wuhu, China.  At 9,956 grt and 13,670 dwt it has a capacity of 1118 TEU, achieved in part by stacking six high on deck. It carries a pair of 45 tonne cranes. 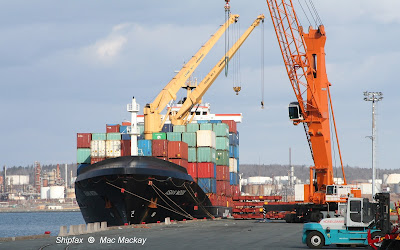 The ship off loaded its hatch covers today to be ready to start work Monday morning with another cargo of nickel sulfides from Cuba. 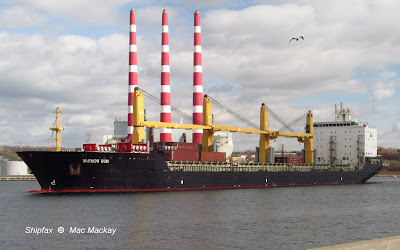 Early this afternoon the Warnow Sun arrived at Pier 9C. Running for Atlantic RoRo Carriers Inc [ARCC] , it is not a RoRo. As the line gradually sheds its Astrakhan class ConRos, they are being replaced by ships such as this one. A 22,863 grt, 33,107 dwt general cargo ship, it carries four 60 tonne cranes and has large box shaped holds, that are reinforced for heavy cargoes, but can be fitted for containers, up to a capacity of 1158 TEU. 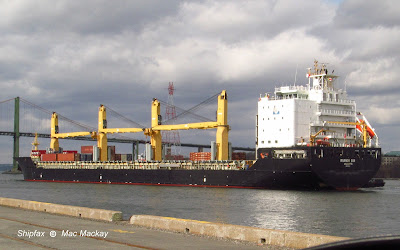 It was built in 2010 by Zhejian Ouhu Shipyard in Zhoushan, China and operates for the St.Petersberg, Russia based ARCC, (but with its address as Hoboken, NJ). The ship is on a form of lease/purchase charter from Schiffahrtskontor Warnow of Germany. [The Astrakhans were built by Warnowerft in Warnemunde.] 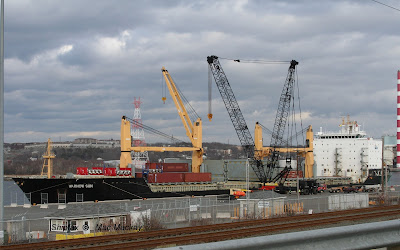 At Pier 9C J.D.Irving Ltd had set up their 300 tonne capacity Manitowoc crane to handle a heavy lift from the ship. Whatever it is, it will be landed on a rail car [QTTX 131331) with a 468,800 lb capacity. This is the first time that a railcar loading has been made at the new Pier 9C, but that was one of the reasons the new pier was built - to avoid congestion at pier 30. The Asian Moon - pictured above will also be loading into rail cars.