Following a week of fog and drizzle, Sunday was an ideal day for ship photos, but the only ships to be seen moving were tankers.

The most interesting of three that I saw was the Panama flag Oceanic Crimson. Not your usual product tanker, this is a chemical tanker of 8,508 grt, 13, 273 dwt built in 2008 by the Jinse Shipyard in Busan, South Korea. It runs under an operating lease with Team Tankers (well known as the Sichem fleet) the ship has epoxy coated tanks, allowing it to carry certain chemicals (some other chemical carrier have stainless steel tanks). 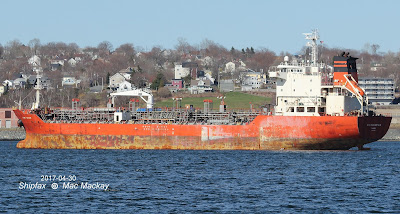 As with most chemical tankers, its hull paints suffers from exposure to the fumes from its various cargoes, and looks to be in worse condition than it probably is. Many of the cargoes are volatile and the numerous red devices mounted above the deck allow for venting.
The ship is in very light condition and is headed for Norfolk, VA. 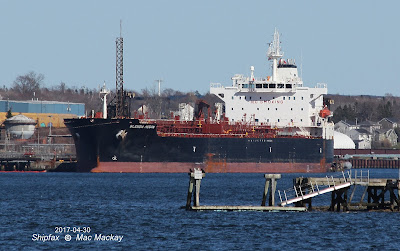 In port this afternoon, at Imperial Oil's number 4 dock, Glenda Megan is a typical product tanker of 29,130 grt, 47,147 dwt, built in 2009 by Hyundai, Mipo. Its owners Glenda International, which is 50% owned by the Italian d'Amico International Shipping, have several ships with the Glenda prefix, and are frequent callers in Halifax on charter to d'Amico. The ship arrived from Port Arthur, TX with refined
products.

And arriving for Imperial's number 3 dock Torm Thyra, a 30,058 grt, 46,308 dwt product tanker built in 2003 by STX Shipbuilding Co of Jinhae, South Korea. The Singapore flag ship (but formerly Marshal Islands, and originally Danish) is saved from being just another product tanker by its owner's distinctive colour scheme. Torm  A/S of Denmark is well known for its bright orange superstructures. This ship called here before, April 18-20, 2014.
Posted by Mac at 9:29 PM