There was lots of action in Halifax harbour today - unfortunately I was somewhere else when most of it was happening, so almost all the photos were of static ships.

The autocarrier Manon finally got out of port after a lengthy stay. It arrived  Tuesday at pier 31, but when it completed unloading machinery, it remained there until late Thursday while Columbia Highway and Oceanex Sanderling did their work at Autoport. 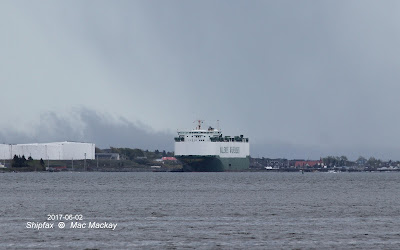 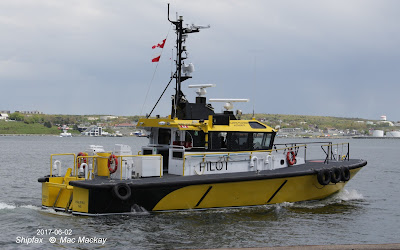 Chebucto Pilot getting underway looking very smart after its refit. It is heading out with pilots for the inbound Budapest Bridge and will disembark the pilot from the outbound UACC Manama.

The Atlantic Pilotage Authority will soon be welcoming two more pilot boats. Under the current names of SC Lynx and SC Cheetah they are water jet propelled boats with 20 knot plus cruising speed, they were built in 2011 and 2012 respectively, and have been working in Europe.


In for CFIA inspection: 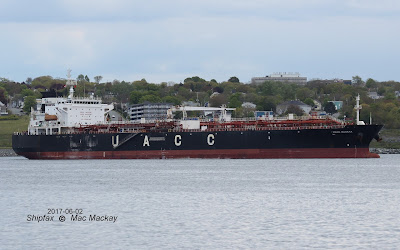 Just getting underway after inspection UACC Manama exhibits no less than 27 manifold connections, signified by the dots between the "A" and the "C". This means that the ship can carry a wide array of chemicals at the same time. Note also the array of piping on deck compared to typical product carriers.

The chemical tanker UACC Manama bound for Quebec, stopped off for Asian Gypsy Moth inspection. A 2010 product of the SLS Shipbuilding Co in Tongyeong, South Korea, the 29,124 grt, 45,612 dwt ship was built as Bunga Balsam for MISC Bhd but was acquired by United Arab Chemical Carriers and renamed in 2014. 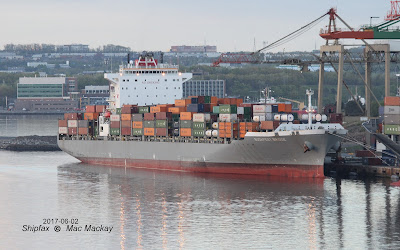 The 4526 TEU ship is one of 5 on the Med/Transatlantic service, and is relatively small and lightly loaded, so can be served by the smaller cranes at the east end of the pier.

Long end of the pier: 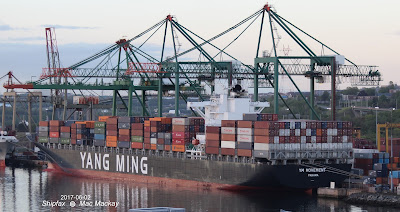 The ship, an "old" post-Panamax is the leading edge of the wave as the new Panama Canal permits much larger ships to reach the North American east coast from the Pacific.
Although Cerescorp, operators of the pier, have not announced any future plans, they need to step up to the plate with bigger cranes and a longer pier if they are to stay ahead of this development. Most of the 6,000 TEU ships can make it under Halifax's bridges, so should be able to use the piers for some time to come.
I expect some announcement soon as the primary Japanese container lines consolidate, and Cerescorp's owners K-Line may have access to more capital.

Meanwhile back at the downtown waterfront the three herring seiners that have been in and out of Halifax for the past week, sailed again this afternoon. 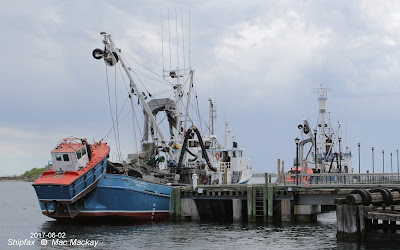