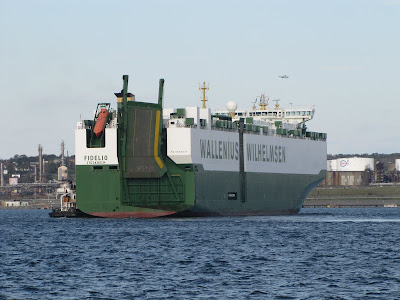 Wallenius Wilhelmsen operates a large fleet of PCTCs (pure car and truck carriers.) These are members of the Wallenius fleet, such as Fidelio arriving this afternoon. They also have container/RoRo ships from the Wilhelmsen fleet, which call here rarely.
However lately many of the so called PCTCs have also been carrying other RoRo cargo such as machinery and construction equipment, all fitted on wheeled platforms (called Mafeis) or trailers, or on their own wheels. These special cargoes are too big for normal container ships and do not require cranes to discharge in Halifax. The large stern ramps on the PCTCs are reinforced to carry heavy loads, and provision is made in the ships for movable decks or extra height decks to facilitate these cargoes.
Fidelio berthed first at Autoport, but later tonight she will shift to pier 31 in Halifax where she will unload some more of the specialized RoRo cargo.
Fidelio was built in 2007 and is 71,583 gross tons vessel.
.