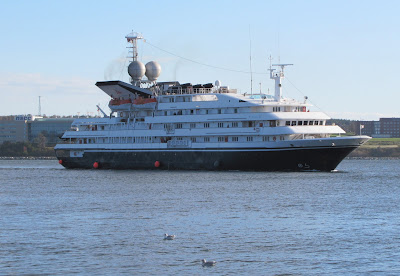 1. Clelia II swings round George's Island to berth at pier 20. 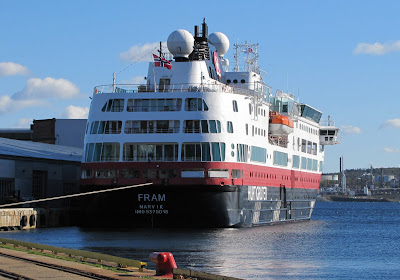 2. Fram rests at pier 23.
Not all the cruise ships visiting Halifax are 3,000 passenger giants. There are several smaller ships and some really small ships that call in from time to time. Generally these are high end or expedition type ships. They can get into small ports and out of the way places, and offer passengers a different experience from the "trapped in a shopping mall" feel of some of the larger cruisers.
Two of the smaller ships are in today.
Fram arrived yesterday and will sail this evening. A banner on its side proclaims "Hurtigruten' that famous coastal service that goes in and out of fjords as it works its way up and down the scenic Norwegian coast line. This ships however was purpose built for Arctic and Antarctic cruising. She has just come in from a trip that took her to Iceland, Greenland, Labrador, Newfoundland and Cape Breton. Have a look at the ship's blog to see some incredible sights and read an account of the tip: http://mvfram.blogspot.com/
The ship was built in 2007 by Fincantieri in Italy, and measures 11,647 tons. She has 254 berths, but can carry 400 passengers in ferry mode. She ends here cruise here and will redeploy to Antarctica for the southern summer season.
The ship was named for explorer Fridtjof Nansen's expedition vessel.
Clelia II dates from 1990 when it was built in Italy as Renaissance Four. It's original owners went out of business and never operated the ship and it was soon sold to Lindos Maritime. Its small size (it only has 42 cabins and can berth 84 passengers) means that it is ideal for some of those unusual destinations. This summer, as it has for several years, it has operated cruises on the Great Lakes, putting into a score of ports, not visited by larger ships. The ship measures 4077 gross tons and flies the Maltese flag. It arrived this morning and will sail this evening.
.
Posted by Mac at 11:23 AM