Atlantic Condor takes to the water 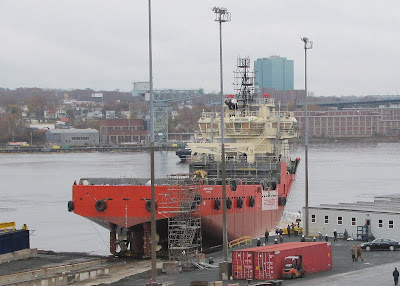 1. Touching the water for the first time. 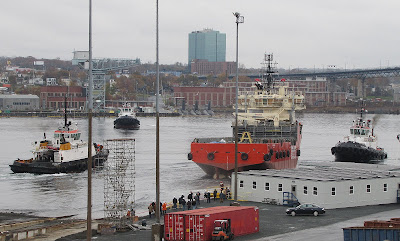 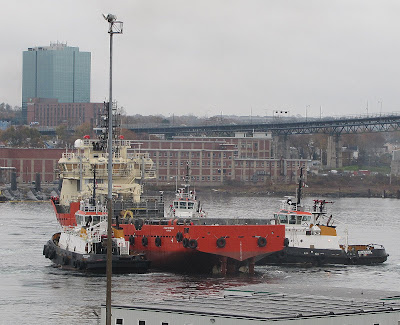 3. Tugs alongside, but the Condor is still moving. 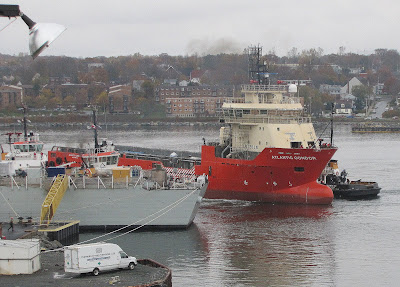 4. An allision with Ville de Quebec is narrowly averted.

Atlantic Condor launched successfully this afternoon at Halifax Shipyard. The Ulstein type UT755LN supply vessel is now afloat and ready for completion by the yard.
The launch seemed to go well, but the ship proved to be most unwieldy after she was afloat. Of course she was without power or ballast, and thus very light and at first she started to head off up the harbour, but then (and this is considered to be a good omen) her bow wanted to head out to sea. It was all the three tugs could do to get secured and straighten her out before she smacked HMCS Ville de Quebec at the Machine Ship Wharf.
It is a good thing yesterday's scheduled launch was postponed, because she would have been virtually unmanageable in all that wind.
Berthing space is at a premium in the yard, and it was an all afternoon job to get her securely tucked in alongside Novadock, behind HMCS Preserver. With Scotiadock II out of the way at pier 6, the space it formerly occupied will now be used for fit out.
.
Posted by Mac at 8:27 PM