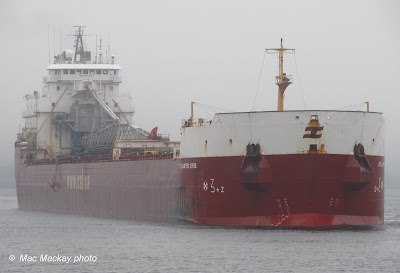 1. Atlantic Erie looms out of the Halifax fog as it approaches pier 25-26 this morning. 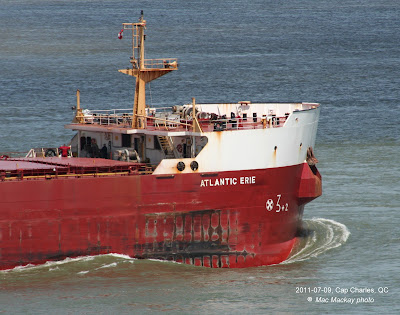 2. The indented knuckle area of the hull shows up in bright sunshine.

The self-unloading bulker Atlantic Erie arrived this morning with another load of grains from the Great Lakes. This is the second time I have seen this ship is less than a week.
The first time was with a group of shipspotters at Cap Charles, QC last Saturday.
It was from that look-off that I first noted the damage to the ship's port bow, at the "knuckle".
As with most ships that transit the St.Lawrence Seaway they do not drive directly into the locks. Instead they come alongside the approach wall at a slight angle, allowing the "knuckle" (that portion of the hull where the curve of the ship's bow transitions into the flat side of the ship) to slide along the wall, guiding the ship into the lock. This behaviour of course causes wear and tear on the hull, and removes the paint quite effectively.
However it appears that at some point Atlantic Erie gave the wall a real slap as she came along, causing a few deep impressions and hull plate distortion. No hull perforation appears to have taken place, so the ship carries on, but repairs will be needed at some point.
Atlantic Erie was built in 1985 in Collingwood as Hon Paul Martin, and became Atlantic Erie in 1988. it flew the Bahamas flag from 1989 to 1996.
In 1998 it became very distinctive by posting the owners web address on the side of the ship - possibly a world's first.
Posted by Mac at 1:03 PM