Sub on the move 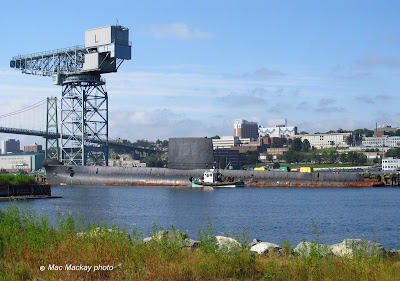 
The decommissioned RCN submarine Ojibwa* was on the move yesterday, shifting berths at Jetty November Lima. The sub has been laid up at the jetty since May 1998, but is about to put out to sea again -with a difference.
This time the sub will be riding on a barge and will be headed for Port Burwell, ON to be preserved as a tourist attraction.
The tug Evans McKeil and the floating drydock HM1 are due this weekend, and after suitable preparations, will set out for the Great Lakes sometime next week.
The remaining two subs Okonogan [corrected] and Olympus were recently put up for sale for scrap.

Update: It is reported that they too will be towed to Ontario by the same tug/barge combo.
Since all three subs have no names posted on them, I only assume the above photo is Ojibwa, but it has also been reported that it is the Okanagan.