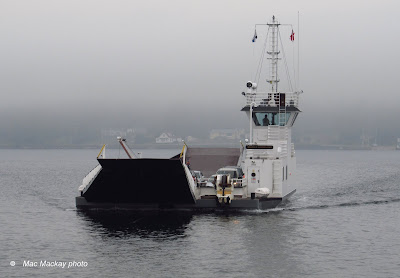 1. The one year old Brady E. Himmelman approaches the La Have landing this afternoon. The elevated wheelhouse gives the operator a much better view over the raised ramps. 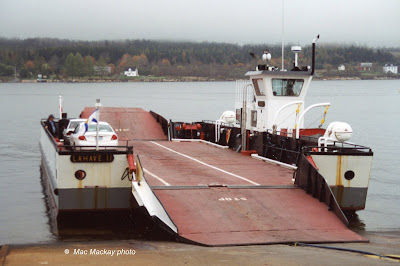 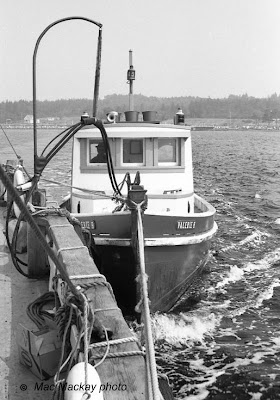 3. The articulated tug Valerie H. pushing A. La Have strikes out for La Have August 15, 1970. The hydraulic lines for the ramps are slung from a davit, to give the tug operator control. The operator may in fact be Capt. Himmelman. The tug will swing round on its double bowline at each landing, without having to resecure.


One of the many well kept secrets of Nova Scotia is the highway ferry system. There are seven routes in all, three using self-propelled ferries and four using cable ferries.
See: http://www.gov.ns.ca/tran/hottopics/ferries.asp
The one I have used the most over the years is the La Have River cable ferry, operating between La Have and East La Have.
A new cable ferry was placed on the route last year. Brady E. Himmelman was named for the long time operator of the service (from 1948-1983). It is a 170 gross ton vessel, built by A.F.Theriault & Son Ltd of Meteghan River, NS, and christened July 29, 2010 by Capt. Himmelman's wife Ramona.
Today was my first trip on the new vessel and it is quite splendid. We whistled across at 5 knots and made a perfect landing.
The new ferry replaced La Have II, a slightly smaller cable ferry (12 cars versus 14 for the new boat.) La Have II was a step up however from the tug/raft combination Valerie H./ A. La Have. The tug was a wooden vessel built in 1962 in La Have and powered by a 130hp Cat. It was owned by Capt. Himmelman. The barge was named A.La Have and it was built in the same year at Meteghan, and measured 51 gross tons.
Eventually the service was taken over by what is now grandly called the Minister of Transportation & Infrastructure Renewal.