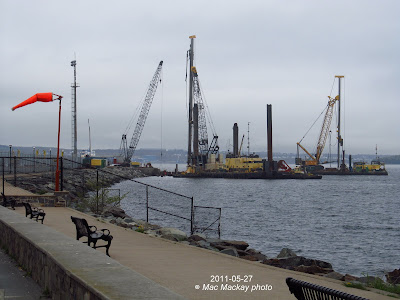 McNally Construction, contractor for the Halterm pier extension, and most other major marine construction projects in Halifax over the last several years, has been purchased by the US marine construction firm Weeks Marine, Inc.
McNally, based in Hamilton, ON, but with an important branch in Sorel, QC (it owns the former MIL shipyard site) and its regional office in Halifax (the former Beaver Marine) did about $150mn in business in the year ending April 30.
Weeks Marine, Inc., based in New Jersey, and was involved in the new Irving/Repsol gas terminal in Saint John, did $500mn of work in 2010.
According to a press release from Weeks, dated July 8, McNally will continue to do business under its present name, and will be a wholly owned subsidiary. McNally has a major presence in the US with its tunnel boring operation based in Cleveland, OH., which will also continue to operate under that name.
The takeover will therefore have no visible bearing on the operations at Halterm. However it may mean that McNally's access to capital will be improved and thus an investment in new plant may be expected. Like many marine construction firms in Canada its fleet of work barges, scows and tugs is aging and renewal did not seem probable. Weeks on the other hand is noted for its first class plant and excellent tug fleet. [see also Tugfax]
Posted by Mac at 11:30 AM