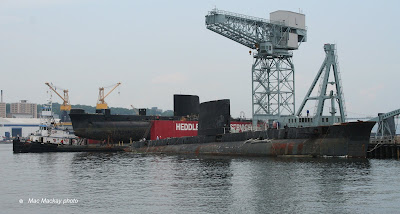 2. While lashings are completed on Olympus, a crew is at work preparing Okanagan. In the right background the sail of the Ojibwa is just visible.

The towout of the first submarine got underway at noon time today. It turns out that the first submarine to go is the Olympus, bound for the scrappers at Port Maitland, ON.
Olympus was acquired from the Royal Navy in 1989, and was used for alongside training only. It never went to sea for the RCN, but did perform a valuable role while other subs of the Oberon class were in refit and not accessible for training purposes. The sub was loaded on the Heddle Marine Services floating dock HM Dock 1 yesterday afternoon. After completion of final securement at noon time today, the tow got underway with the tug Evans McKeil. A small deck crew aboard the barge when it got underway, were removed by the naval auxiliary tug Merrickville before leaving the harbour.
.
Posted by Mac at 1:12 PM