Thanks to an alert reader, I am able to update the previous post.
The former cable ferry La Have II, retired last year, has a new life in Shelburne. A sectional scow is spudded down off Shelburne Ship Repair shipyard building pedestals for the marine railway. La Have II is used to ferry materials out to the construction project, this time powered by the Dominion Diving tug Roseway.
The chief advantage of La Have II is its shallow draft and loading ramps, which allow trucks to drive right aboard from the beach or a simple shore ramp. 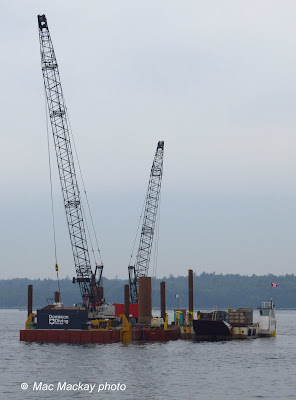 1. The multi-section scow is spudded down off the slip, with a steel pedestal on deck. 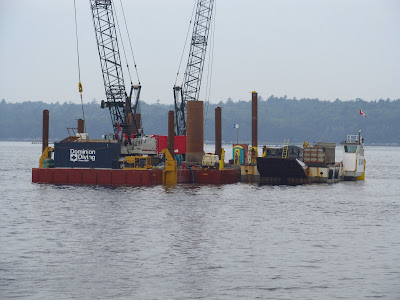 2. La Have II is tied up alongside, with what appears to be a gravel truck on deck.