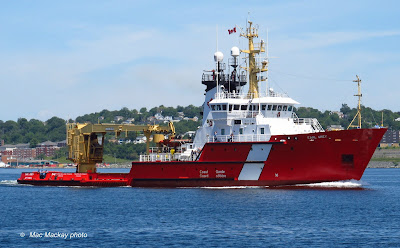 The Canadian Coast Guard navigation aids vessel Earl Grey sailed this afternoon after a maintenance period at the Bedford Institute.
One of two Type 1050 navaids vessels in the CCG (the other is Samuel Risley, based on the Great Lakes) it was built at Pictou, NS by Ferguson Industries in 1986. Its launching sponsor was the grandmother of the current minister of National Defence, Peter McKay.
Designed by Robert Allan Ltd of Vancouver it was a departure for Canadian vessels, following the pattern of platform supply vessels, with the working deck aft. It is fitted with a crane, mounted near the port rail, instead of the traditional derrick of its predecessors.
Fondly known as the "Early Grave" by some of its past and present crew members, the ship works from Halifax and tends to buoys all over Atlantic Canada. Its second home is Charlottetown, where it is also a familiar sight. It also carries out light icebreaking in winter.
It is the second ship in Canadian service to honor the popular former fourth Governor General of Canada 1904-1911, and donor of the Grey Cup for the Canadian football championship.
The first ship named Earl Grey was built in 1909 by Vickers Son & Maxim and was for its time a powerful icebreaker. During the First World War it was sold to Russia and lasted until about 1959.
Posted by Mac at 1:29 PM