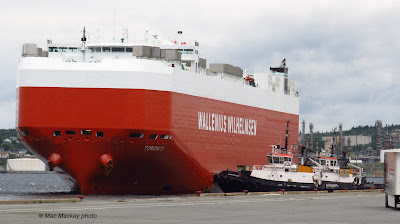 The Pure Car and Truck Carrier Toronto arrived last evening at pier 27. The British flag vessel is a member of the 31 ship strong Wilhelmsen Line of car carriers and operates within the even larger Wallenius Wilhelmsen group. It measures 61,321 gross tons and depending on your source was built in 2004 or 2005.
Although capable of carrying 6350 cars, the ship can also carry project cargoes and containers in its specially constructed internal decks.
The ship did not go to Autoport as mighty be expected for a PCTC, so may have some special cargo on board.
.