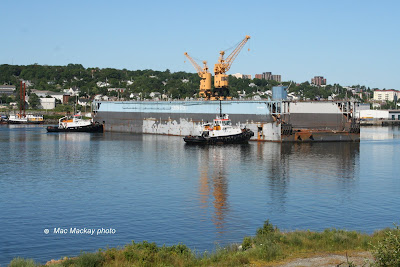 1. Tugs move the floating dock out of pier 6-7 into the stream. 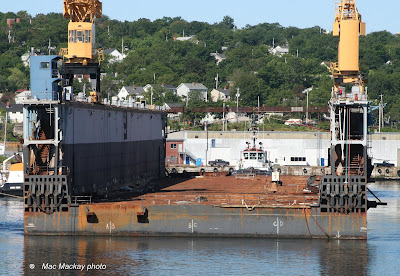 2. A forlorn looking main deck, shows little sign of activity since it was raised a year ago. 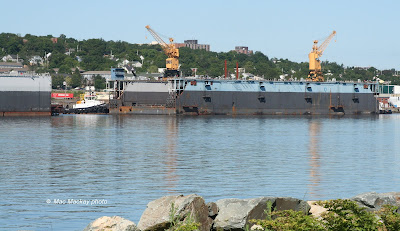 3. Once turned, the tugs are now sliding it back into position alongside the large Novadock.

The Scotia Dock II floating drydock was built in 1964 by Canadian Vickers Ltd for use in their shipyard in Montreal, and was named General Georges P. Vanier.
That yard was eventually closed, and in 1998 the dock was sold to Irving Shipbuilding Inc and towed to Halifax. It replaced a previous floating drydock, named Scotiadock, built in 1933 as Prins Hendrik Dok No.4 in Rotterdam, and acquired and rebuilt by the shipyard in 1979.
Scotia Dock II lead an uneventful life up until May 8, 2011 when it sank in position while attempting to raise the tug Stevns Breaker for delivery inspection.
The tug was not harmed, but the same could not be said for Scotia Dock II. Whether in the initial sinking, or in the raising process, which took a month, there was considerable structural and water damage to the dock, which meant that it was no longer usable.
Since the dock was raised in June 2010 it has been sitting at pier 6-7.
In this morning's trip the tugs turned the dock end for end and moved it back to its customary position alongside the large Panamax drydock Novadock. Perhaps this means that the dock will be repaired and put back into service.
.
Posted by Mac at 3:08 PM