Los Angeles Express, built in 2003 by Daewoo Shipbuilding and Marine Engineering of Koje, South Korea as Northern Magnum, was placed immediately on long term charter to Hapag-Lloyd, by its owners Norddeutsche Reederei H.Schuldt. These charters allow shipping lines to lock in a daily charter rate without carrying the cost of building the ship on their books. At the end of the charter the ship's owner is responsible for the ship, but has already benefited from depreciation and other accounting allowances.The arrangement may be particularly advantageous for certain German investors, where laws favour owner syndicates.
Los Angeles Express is another of the biggest class of ships to call in Halifax, at 6750 TEU, on a ship of 75,790 gross tons and 85,810 deadweight tonnes. Previously on Hapag's Asia-Europe Express route, it is now running transatlantic. 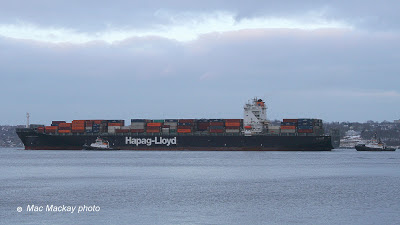 2. Tug Atlantic Willow has joined the procession as the ship lines up for the Narrows.
Posted by Mac at 5:01 PM