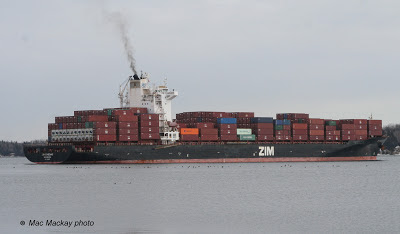 Ships of ZIM Container Service are usually in port for a full working day, and sometimes longer. Today's visit of Zim Qingdao was certainly not typical - it lasted only a half day. It appears that the ship loaded some refrigerated containers and may have unloaded a few boxes too, but that was it.
Weather delays and re-routed cargoes on other ships are the likely explanations for this situation, as the ship may have had to skip some port calls to maintain schedule.

The real story
I hear that the ship was turned back form New York because it was carrying 15 containers for Cuba. The US embargo on trade with Cuba has not been lifted (although President Obama has suggested that he would like to do so). Therefore the ship was sent back to Halifax to unload the boxes, then return to New York to carry on with its normal run.
Canada, and the port of Halifax have certainly benefited from the Cuban embargo for many years, with the presence of Melfi Lines and Nirint (which trade directly with Cuba)  and other lines such as Zim interchanging Cuban cargo in its hub port of Kingston, Jamaica.
Posted by Mac at 8:19 PM