Spotlight on SN Olivia - but all is not sweetness and light

The sun made an attempt to break through the clouds this morning to spotlight the tanker SN Olivia as it arrived with another cargo of crude for Imperial Oil. The tug Atlantic Oak has a line to the stern for escort. All is not well in the Halifax crude oil business however. 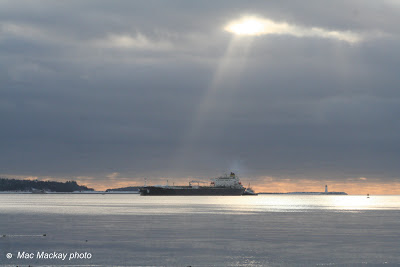 The ship is one of two Aframax tankers owned by Scerni di Navigazione SRL of Genoa, and flies the Italian flag. It was built in China by Hudong Zhonghu Shipbuilding Corp of Shanghai and measure 60,193 gross tons and 109,005 deadweight tonnes. (Aframax tankers are 120,000 deadweight tonnes or less) It was built originally for another Italian company, d'Amato Fratelli as D.T.Vincenzo P.
The present owners acquired the ship in 2011. Gruppo Scerni includes Paola Scerni, a ship's agency company founded in 1840, but their entry into the tanker business only dates from 2010.
The ship is managed by V Ships of Monaco, and operates in the OSG International tanker pool of nearly 100 tankers.

2. The ship's bow is encrusted with frozen spray. In order to be cleared to enter Halifax, its anchors must be free and ready for use. The crew has doubtless spent some time chipping and washing down with warm water.

The above is all very interesting, but one has to wonder how many more crude tankers we will be seeing in Halifax. As a columnist in the local paper pointed out last week, we have heard very little about Imperial Oil's attempts to unload the Dartmouth refinery (called Imperoyal). The move is to ever larger refineries (such as Irving Oil's Saint John operation) and small refineries like ours are on the way out. The recent closing of several small plants in the US and Montreal, and the earlier closing of the other Dartmouth refinery (at the end it was owned by Ultramar) does not bode well for Imperoyal. Buyers are not lining up, and the expectation is that it will be shuttered and become a tank farm, and distribution centre.
The Irving refinery is using increasing quantities of oil from the Bakken shale field in North Dakota. It has been arriving in Saint John by rail car, but this is a cumbersome method of transportation for large quantities, and there has been pressure to reverse the flow of the Portland pipeline, and to extend other Canadian pipelines eastward to use North American/domestic crude.
The recent embarrassment on the Hudson River may bring the pipeline debate to the fore in eastern Canada. Irving Oil hired the tanker Stena Primorsk to start a shuttle of Bakken shale crude from Albany, NY and bring it round to Saint John. Albany has huge rail yards and tank storage, and trains from North Dakota must pass through Albany en route to Saint John, so it made some sense to short cut the long train trip through New England and Maine. An eight day round trip was contemplated, which would take some of the pressure off the Saint John rail yards.It would also continue to make use of Irving Oil's extensive tanker unloading facilities.
Unfortunately Stena Primorsk ran aground December 21, 2012, 10 miles south of Albany on its first trip, after it lost power. It punctured the outer skin of the hull on rocks, but did not leak any oil. The ship had to be lightered off to barges, and go to New York for repairs.
Pipeline foes have become quite vocal on the west coast, and the United States Coast Guard is now conducting an impact study on increased tanker traffic on the Salish Sea and Strait of Juan de Fuca.The Province of British Columbia is not keen on having Alberta bitumen pipelines crossing its pristine wildernesses (those that have not been ravaged for forestry or coal mining) en route to Kitimat or other BC ports.
I am sure the USCG will also take an interest in crude oil traffic on the Hudson River, too.  The environmentalists have certainly chimed in on this one.
In any event the Imperial Oil refinery will not be part of the equation no matter where the crude comes from unless a buyer is found soon. Interestingly the tanker SN Olivia featured above, was in Portland, Maine on December 29, where it discharged a cargo. It was then granted a coasting license to carry 500,000 to 600,000 bbls of crude oil  from Whiffen Head NL, to Halifax, and or Canaport (Saint John) and or Point Tupper and or Portland, Maine (for the Montreal pipeline) between January 3 and Feb 1, 2013. It was granted this license because no Canadian flag tanker was available.
As mentioned earlier OSG Canada reflagged their sole Canadian tanker, Overseas Shirley, to the Marshal Islands in October 2012.
Posted by Mac at 12:26 PM