1. The tugs Atlantic Willow and Atlantic Larch have come alongside Torino to assist. The ship must be turned ninety degrees and backed in to the pier.

A rare mid-day arrival for an autocarrier, and also unusually, tying up at pier 30-31. Most autocarriers arrive early in the morning at Autoport, but with New Year's Day a holiday for longshoremen, Torino opted to go to pier 31 first, and to be ready for work when work resumes tomorrow. Whatever she has on board appears to have been loaded last and must come off first - likely a large object!
The ship will move to Autoport tomorrow to unload her cargo of cars.
Torino was built in 2009 and is registered in Southampton, UK, where her owners, Wilhelmsen Lines Car Carrier division is based. The Wilhelmsen parent company is Norwegian and the ship works in the pool with Wallenius Lines of Sweden.The ship measures 61,328 gross tons and has a capacity of 6,354 autos.

2. Viewed from abeam, the ship's size is evident. 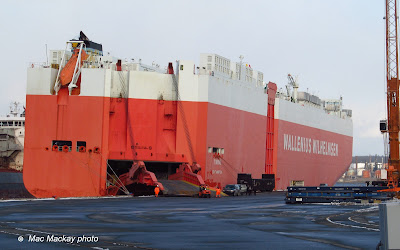 3. Now alongside pier 30-31, the crew has just lowered and secured the stern ramp and it appears that Canadian Border Services Agency members are preparing to board.