Arriving just as a blizzard got under way January 2, BBC Kwiatkowski had to cool its heels all day yesterday as the snow continued blow around and pile up. Once the storm had passed late last night it took until this morning to clear away enough space before the ship could begin to unload its project cargo.Even then it must have been a cold and awkward job at the very exposed IEL dock in Dartmouth. 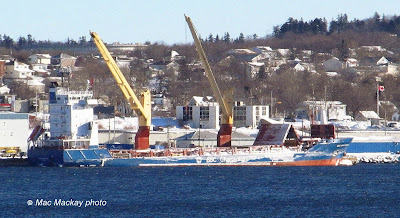 Built in 2008 by the Remontowa shipyard in Gdansk, Poland, the 6155 grt, 7732 dwt ship has its own pair of 120 tonne cranes.There were also a couple of shore based cranes to assist in repositioning the cargo once it was landed. But it was slow work. The ship's departure time was continually advanced during the day from 1300 to 1800 to 1930, but it should be able to sail this evening.

The ship is operated by Briese Schiffs. of Germany and as with many German ships flies the flag of Antigua and Barbuda. The ship was built as Eugeniusz Kwiatkowski, but assumed its current name before completion to take up its charter with BBC.


This is not the first ship to bear the name of the Polish politician and hero (see: http://en.wikipedia.org/wiki/Eugeniusz_Kwiatkowski). A 1975 built container ship of 10,129 grt operated by Polish Ocean Lines was also named Eugeniusz Kwiatkowski. I am not sure if it ever called in Halifax, but several of its sister ships, also honoring Polish heroes were frequent callers here. That ship could only carry 218 TEUs whereas  the newer one can carry 532, although the older ship did have capacity for twelve passengers.

I did not go over to Dartmouth to see what cargo BBC Kwiatkowski unloaded, so I will have to update that later.

Update: The ship must have loaded cargo, since the pier was completely bare when I got there Sunday January 5.