Cape Flattery made a multi-stop visit to Halifax, tying up first at Irving Woodside last evening. After bunkering it moved over to pier 31 for some maintenance or other work. 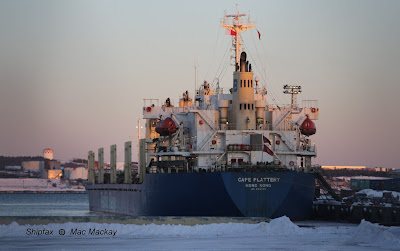 The ship was built by Imabari Zosen in Imabari, Japan in 2004. It is a bulk carrier of 16,978 grt, 28,433 deadweight and is equipped with four 30 tonne cranes and stanchions to secure deck loads of timber. It was named Pamukkale when built, but was renamed soon after and is now owned by the publicly traded Pacific Basin Shipping Hong Kong Ltd, one of about 100 ships in this major fleet.

It arrived from the St.Lawrence and is headed for Veracruz, Mexico.