There was a fair amount of activity on the Halifax waterfront Saturday morning. Ships were hustling to get their work done in advance of a major snow storm.
At pier 31 Helga was busily unloading its nickel cargo onto rail cars and into the wharf shed. 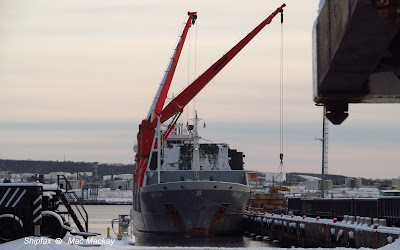 Using its own 80 tonne cranes for the work, Helga unloads its cargo from Cuba.

Meanwhile at pier 27 opposite Margaretha was working its cargo of rail track, also using its own cranes. The ship had put in at St.John's, NL January 1 on its way from Europe, possibly to re-stow some of the cargo. It's port of registry is also in St.John's, but it is the port in Antigua. 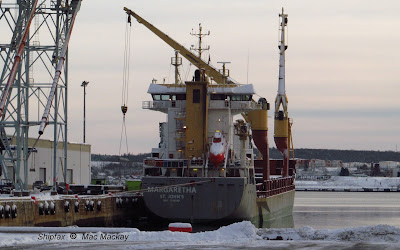 
Both ships are products of the Netherland based Damen shipbuilding group.
Margaretha was built as Hanna C for Carisbrooke Shipping, Isle of Wight. The hull was fabricated in Galati, Romania, then towed to Hoogezand, Holland for completion in 2002. In 2002 it was renamed Corral, in 2004 Hanna C again, then in 2006 Opalace and in 2009 Hanna C.  In 2012 Rudolph Schepers, GmbH of Haren (Ems) acquired the ship and gave it its present name. The ship measures 7752 grt, 10,526 dwt.

Helga on the other hand was built at Damen's Yichang Shipyard in China. It was built as Helga, but renamed in 2010: Kent Atlas, 2012: Helga, 2013: Clipper Avalon, 2014: Thorco Tribute, reverting the Helga again in 2015. Owners are listed as VanDijk Rederij, Westerbroek, Netherlands, with Wagenborg Shipping BV as managers. It has been calling in  Halifax since 2015 for Nirint Shipping. A 8999grt, 12.044 dwt ship it is a member of the CF12000 class of combi-freighters.

Margaretha was not the only ship with a sponsoned hull. At pier 25 Atlantic Huron is in port for winter layup. The ship was widened below the level of the main deck in 2002 to take advantage of greater allowable width in the St.Lawrence Seaway locks. The modification increased the ship's deadweight capacity by about 2,000 tonnes. 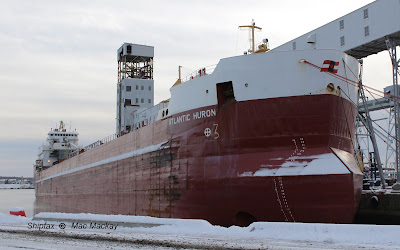 A thin layer of snow along the hull projection shows were the ship was widened. Great Lakes ships take tremendous abuse entering the Seaway locks, and the numerous dented plates at the "knuckle" show how hard life can be for lakers.


The tanker Cape Brasilia was working at Imperial Oil. It arrived Thursday, but had been anchored outside since earlier in the week. 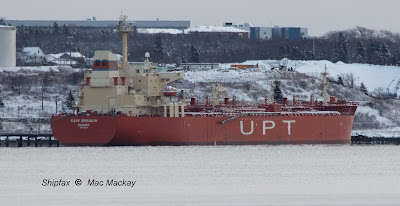 It was a very un-Saudi Arabian scene at Fairview Cove where Bahri Abha was finishing up its work. The National Shipping Company of Saudi Arabia ship made its fir call in Halifax May 17, 2013. 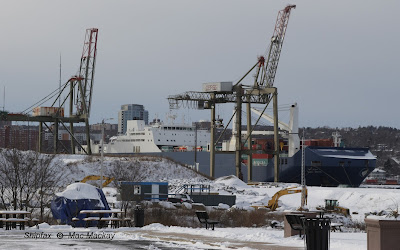 In the foreground some snowy picnic tables at the Africville Museum, in the middle ground some fill stockpiling for future expansion of the Fairview Cove container terminal, and a pollutant containment mountain. In the background CN Rail's Rockingham yard.

Also this morning Atlantic Towing tugs moved Atlantic Towing Ltd's new supplier Atlantic Griffon from Halifax Shipyard to pier 9B. The cold move signified completion of the construction process and commencement of the trials period. One of tow suppliers built by Damen's Galati yard in Romania, it arrived in Halifax in two pieces in August. The superstructure was connected to the main hull over the last four months, and it is now being made ready for sea trials. 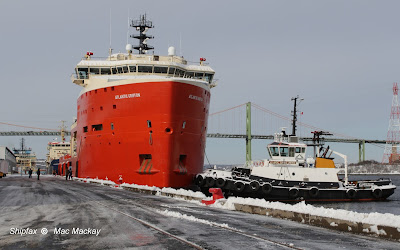 Atlantic Willlow pushes on the bow while Atlantic Oak works the stern as Atlantic Griffon is made fast alongside pier 9B.
Immediately astern, Algoma Dartmouth has taken up a berth to shelter from the incoming storm, and astern of her Maersk Nexus is tied up at pier 9C.