The bunkering tanker Arca 1 is firmly lodged on the shore just west of Sydney Mines on the coast of Spanish Bay, between Merrit Point and Bonar Head. The position is only about six miles from the entrance to Sydney Harbour. The small ship was making for Sydney when it experienced engine failure and drifted ashore in the early hours of this morning. During the day today a Canadian Coast Guard Cormorant helicopter evacuated the six crew men to safety.
According to reports, the Coast Guard is now mobilizing for an environmental clean up, as the ship's fuel is likely to start leaking out.

When I covered this small tanker's story in Shipfax January 4  I was seriously concerned about its fragile propulsion system and the necessity to travel in good weather only. I had grave reservations about the wisdom of allowing this underpowered and sub-standard craft to sail into the Gulf of St.Lawrence, let alone on its intended voyage to the Dominican Republic. It had leap-frogged down the St.Lawrence from Sorel to Quebec City, to Havre-Aubert, in the Magdalen Islands. But during the jump to Sydney it may have been overtaken by a major winter storm and could not get out of the way.
What possesses the authorities to allow this sort of thing to happen again, after the Miner experience is beyond me. It is fortunate that there was no loss of life. 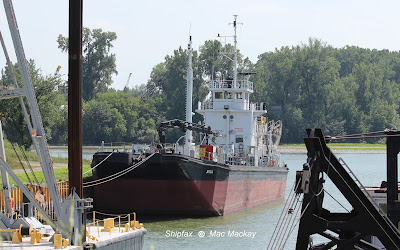 The little ship was widend and deepened in 2004, but still has a barge shaped hull.

Little more than a powered barge, it was never intended for sea-going voyages, and as I reported, the previous time it visited Halifax it was towed here and towed back to Montreal.
The ship's propulsion system is called "outdrive" and it consists of two engines, mounted on the after deck in very flimsy housings. These provide power to vertical shafts, slung outboard of the stern, to steerable propellers. That the ship suffered engine failure is no surprise. The engines are very exposed, particularly to following seas, and should they fail, attempting to work on them in frigid temperatures, high winds, driving snow and rough seas is inconceivable. 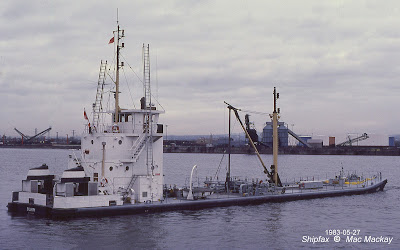 This view of a sister tanker, shows the engines mounted on deck and the outdrives.

Transport Canada, responsible for Port State Control, must be held responsible for its actions (or lack thereof). How inspectors could let such a ship go to sea makes one wonder what sort of oversight they are providing to Canada and how they can justify their existence. If the simple expedient of hoisting a Panamanian flag exempts a ship from being subject to any Canadian  oversight while in Canadian waters
then something has to change.
The Laurentian Pilotage Authority must also bear some responsibility if its pilots worked the ship from Sorel to Quebec and Quebec to Les Escoumins, surely they were aware of its potential for disaster, and had a duty to report to Transport Canada Ship Safety.
If the Transportation Safety Board conducts an inquiry, it can only make recommendations, which Transport Canada is free to ignore. It has done so in the past because the NTSB has no teeth.
Then there is the Coast Guard. With no assets in the area able to assist a vessel in distress, all they can do is rescue and clean up - at great expense to the taxpayer. There are several tugs in the area that could have assisted, but the Coast Guard has no mandate to hire tugs to do rescue work, and is still a long way from having its own rescue tugs in service.
And finally, did the owner post a bond before sailing. This is a good question because the new international convention and the government's promise to institute such a regulation, may at least help to protect the taxpayer from  the clean-up and wreck removal costs. Since the ship is essentially valueless, has no cargo aboard, and is probably minimally insured, the Owner is unlikely to have very deep pockets.