Polish Trawlers - back to the shoe box

Dark, rainy and stormy days mean few photos and not much to see in the port, so it is back to the shoebox for some older material.

When the waters off Canada's east coast were a free for all for fishing, the Commecon nations sent armadas of boats to vacuum up the seabed. The Russian, Polish and East German fleets were the largest, but there were also representatives of Bulgaria and Romania. Cuba was also present (with Spanish built trawlers) as were the traditional nations of Spain and Portugal. France had a presence as did, the Faroes Islands, and others.

Herewith a selection of some of the impressive Polish boats, in no particular order: 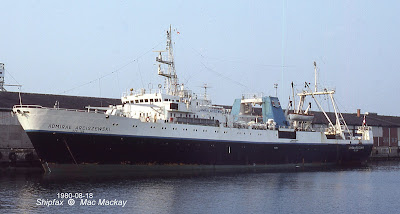 Admiral Arciszewski was a B89 type, built in 1977 in the Komuniy Paryskiej yard in Gdynia. At 2620 grt it was among the largest Polish vessels, classed as a factory freezer stern trawler with reefer capacity and ice strengthened. It was renamed Queen Lydia in 2002 and broken up in Alang 2004-06-09. 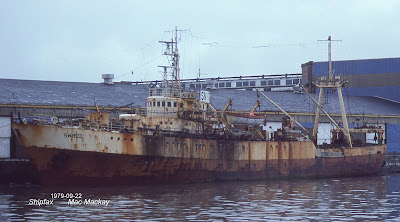 Streaked with ink, this boat's job was to catch the messy squid using jigging machines mounted along the ship's rails. Squid was used as bait for other fisheries, such as the Japanese long liners. 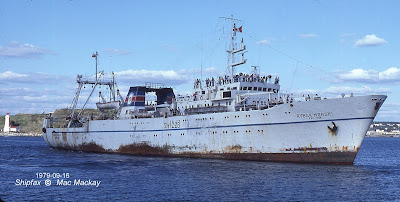 After a few days of shore leave, the crew is crowded onto the monkey island for their last glimpse of land for a time. 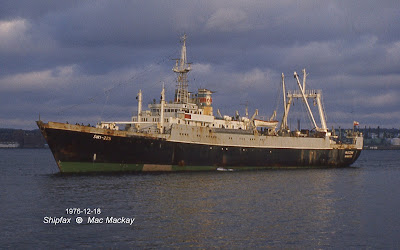 Unlike the crews on USSR vessels, who  were closely supervised by political officers, the Polish crews were more sociable. I made the acquaintance of one in particular, who sent me some negatives (they couldn't afford prints) that he took at sea. I believe he processed the film at sea too. 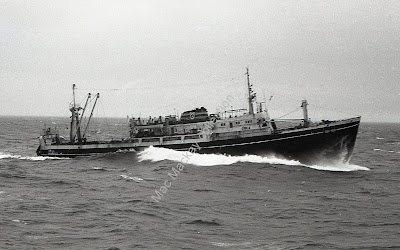 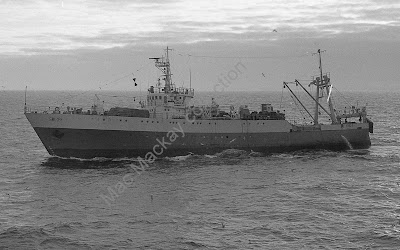 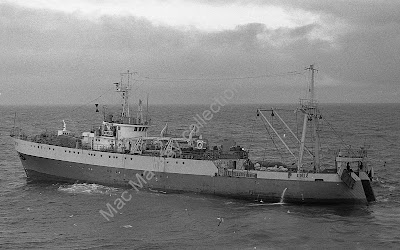 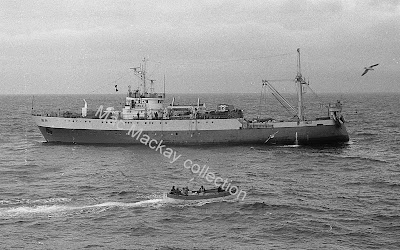 The freshly painted Konger may have arrived from home, and the boat is making a mail transfer.


The Poles fished in close association with the USSR and often passed close to each other. 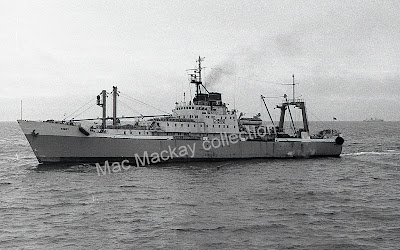 The USSR Kivach is actually fishing in this photo. The trawl wire is visible on close inspection.

Kivach, a 3091 grt, fish factory trawler with large reefer capacity, came from the Okean yard in Oktyarksoye in 1971. It was broken up in Alang 1996-04-13. Another massive catcher of the same class can be seen on the horizon.

The Polish vessels fished from the Baltic ports of Swinoujscie (SWI) or Szczecin (SZN) also known as Stettin. They needed the ice strengthening to return home in winter. The boats caught processed, packaged and froze the fish on board. Sometimes they sent the catch home on freighters, or returned home after filling their holds to capacity. There were also accommodation vessels that brought replacement crews and spare parts and more packaging material to the fleet and returned home with processed catch and the tired crew.