An unusual tanker arrived today with an unusual load - but it is not the first.
Cielo di Hanoi tied up at Irving Woodside this morning with another cargo of fuel from Europe. Does it seem strange to you that with a refinery a day's sailing away in Saint John, Irving Oil would be importing refined petroleum products from the Netherlands, a whole ocean away? Does to me, but the oil business is a strange one.
At least three tankers have arrived with European fuel products since Irving Oil re-opened its Woodside facility after a major rebuilding. All have given their last port as IJmuiden, the sea lock entrance to Amsterdam.
While Amsterdam is not known as a refinery port, unlike its neighbour Rotterdam (eight hours away by inland barge) it has a mammoth storage and blending capability, with at least a dozen separate facilities with millions of cu.meters of tankage for petroleum and biofuels. 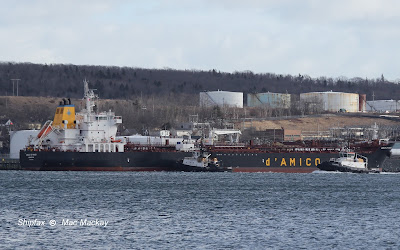 Atlantic Willow has done its job at the bow of the ship and is returning to base, while Atlantic Fir continues to push toward the stern of Cielo di Hanoi as it docks at the Irving Oil Woodside terminal.

Cielo di Hanoi is unusual also, but is name (translation: Hanoi Sky) is a hint. It was delivered only seven months ago by the Hyundai-Vinashin Shipyard Co Ltd in Ninh Hoa, Vietnam. It is one of four 24,194 grt, 39,309 dwt tankers ordered from the yard by d'Amico Tankers in 2013.
(The price tag for all four was $126mn with an option to upgrade to ice class of $936,000 per ship.)

The shipyard is a joint venture between the Korean Hyundai Mipo Dockyard and the state owned Vietnam Shipbuilding Industry Group. After a scandal plagued start the shipyard partnered with Hyundai to bring in management expertise and technology to move it up to a leading world shipbuilder.

While d'Amico is an Italian company, the tanker operating arm d'Amico Tankers DAC is based in Dublin, Eire and the ship is registered in Liberia.