The inaugural arrival of Tropical Shipping's first ship on its service from Halifax to the Caribbean was decidedly un-tropical. A fresh snow fall greeted Vega Omega as it tied up at pier 42, Halterm. The ship was lightly loaded, indicating that most of its current cargo is empties, and most of its business will be exports. 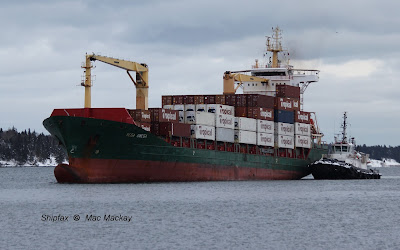 Vega Omega is on charter from Vega-Reederei Friedrich Dauber GmbH+Co KG of Hamburg. The ship was built in 2006 by Qingshan Shipyard in Wuhan, China. Its 9940 grt, 13,640 dwt allows it to carry 1118 TEU including 220 reefer plugs. It has two 45 tonne cranes. 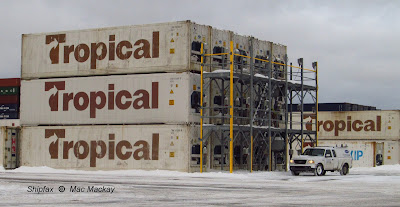 Judging by the numbers of reefers plugged in at Halterm, there will be a sizable amount of perishables headed south. At peak season Tropical is expecting to move 500 TEUs out of Halifax per weekly trip. Since a lot of those will be arriving by road it will only add to downtown's traffic woes.
Tropical is an ideal candidate for Fairview if and when the two terminals merge operations, since their ships are small and will have no trouble getting under the bridges.

Tropical Shipping used the Port of Saint John for many years, but the line struck a better deal with Halifax and has moved its shipping activity here, although its business office remains in Saint John. The reason for this would seem obvious - much of their business is done with the Irving owned Cavendish farms and other Irving companies. Container stuffing in Halifax for LCL cargo is being provided by Irving-owned Midland Transport.

Tropical is upgrading its fleet with two new ships of 1100 TEU with 260 reefer capacity expected in July and September (and an option for two more). The current fleet numbers about 15 ships.
Parent company of Tropical is Saltchuck Resources of Seattle, owners of the Foss tug fleet, Totem Ocean Trailer Express (TOTE Maritime) and numerous other oil and land transportation operations in the continental US and Alaska.

Their ships are relativley small compared to the ship that was berthed at the adjacent pier 41 this afternoon.


COSCO Prince Rupert is a 91,051 grt, 102,742 dwt vessel with a capacity of 8208 TEU (including 700 reefers). The ship is owned by Seaspan International and leased to what was China Ocean Shipping Company. Now that COSCO has been merged with China Shipping Container Lines (CSCL) the new entity is China COSCO. However the operating entity which combines COSCO Container Lines and CSCL has become COSCO Shipping Lines. Saves on paint.

COSCO Prince Rupert operates as part of the Columbus Loop with CMA CGM and UASC. However that is about to change, as United Arab Shipping Company has been acquired by HAPAG-Lloyd.  CMA CGM, COSCO, Evergreen and OOCL have formed the Ocean Alliance which will maintain the Columbus Loop. I also noted a number of Hamburg-Sud containers on the ship, and that may change too, now that Maersk has bought Hamburg-Sud!

Many of these re-alignments will not happen until April or even later in the year, by which time there could be more changes in the container world.