The Best Deal in Town to me has always been a ferry trip across Halifax Harbour. Although the price has increased over the years, the $1.75 one way price also entitles you to a transfer to bus routes for no additional charge.
Today was an exceptional day for the end of January - mostly sunny, little wind and and a temperature several degrees above zero. It was ideal for a quick round trip errand to Dartmouth - over, errand and back in one hour.

I went to Dartmouth on Craig Blake the second of the second generation ferries, completed in 2015. 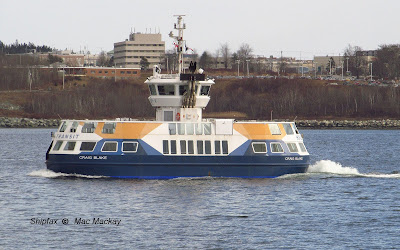 Among the features of this revised design is the larger wheelhouse, and exhaust stacks. 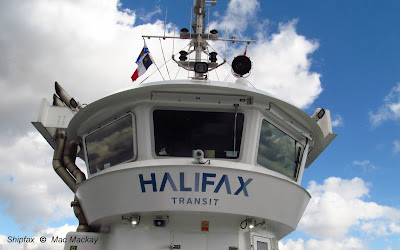 The new design wheelhouse has more room, but also better visibility of the approaches and the landing stages. (The flag on the left is the Acadian flag, a french tricolour differenced with a gold star.) 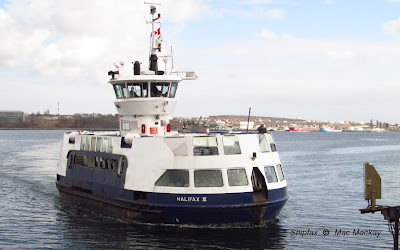 The original 1978 version on Halifax III (which was on the Woodside run today, with Woodside I) had a much smaller pilothouse, which was offset to one side to allow for "eyebrows" on the landing stages. These shelters have now been removed to suit the newer ferries.

I returned on the newest of the second generation boats, Viola Desmond. 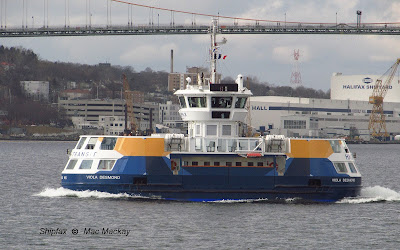 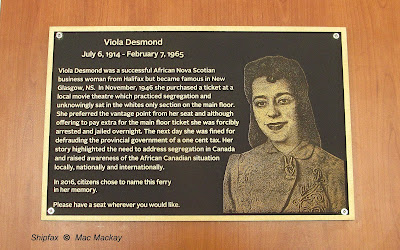 This was my first trip aboard, so I took the opportunity of photographing the plaque that commemorates the vessels namesake.

There was no passing shipping during my trip, but there were views of ships nevertheless. At HMC Dockyard, HMCS Athabaskan was alongside. 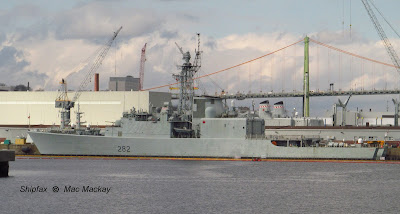 The last survivor of the Tribal class vessels, it is also Canada's only destroyer. By current estimates, when it is decommissioned, the RCN will be without a destroyer, and the command capabilities that go with it, for as much as ten if not fifteen years.

On the Dartmouth side, the former Canadian Coast Guard base, in the process of transformation to an ocean research centre, is the winter berth for several vessels.

The research ships Leeway Odyssey (red hull) and Coriolis II ( blue, white, yellow hull) have been joined in recent days by the Secunda Marine supplier Scotian Sea. It had been working for Shell Oil's exploration program with Stena IceMAX . That programn has been wound up, the drill ship has offloaded all its drill pipe and has now sailed for Las Palmas. en route to its next assignment.

Also tied up at the base are the retired first generation ferry Dartmouth III and the supplier Trinity Sea (out of the not picture to the right). 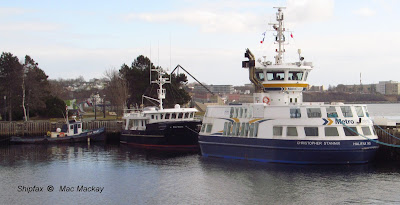 At the Alderney landing dock the first of the second generation ferries Christopher Stannix (delivered in 2014), was enjoying a day off.  It received its paint scheme before Metro Transit and Halifax itself was re-branded with the cross bar-free letter A. It thus escaped the dazzle paint scheme reminiscent of World War I that its later fleetmates received (see above). I hope the next two ferries - to be delivered in 2017 and 2018 will have another variation, (World War II camo perhpas?)  just because it is nice to be able to distinguish between them.

Astern is the Dartmouth-built trawler yacht Full Steam and alongside the seawall the tug Gulf Spray is laid up for the winter. It will be back at work in April shuttling refuse scows to cruise ships.