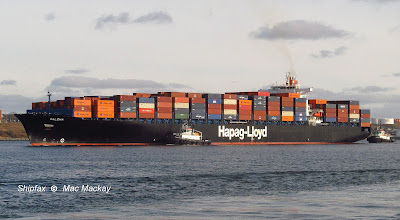 Palena, built in 2006 by Hyundai, Ulsan is a 73,934 grt, 81,247 dwt ship with a capacity of 6541 TEU (including 600 reefers). It has been owned by H-L since June of 2016 and has yet to acquire s typical H-L name. Owned previously by Southern Ship Management Co SA, I believe its entry into the H-L fleet is a result of the merger with CSAV, the large Chilean shipowning company that now controls Hapag-Lloyd. Since January 2015 it has been operating from Southeast Asia via the Med to Europe. Prior to that it was operating largely within Asia for several years.

However as an (old) post-Panamax ship it could now transit the Panama Canal.

Since the G6 Alliance is due to expire in April, there will many changes in the roster of ships to come. and this one may find another place in the Hapag-Lloyd world.