There was not a great deal of traffic in the port yesterday, nor today, which most people took as a holiday.
Mitiq completed its work at Fairview Cove and sailed mid-morning - obviously in ballast and for Trois-Rivières, QC. 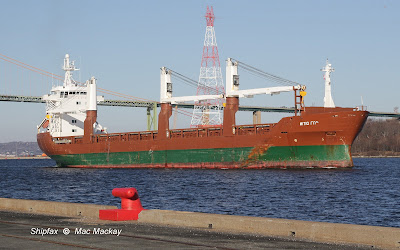 Atlantic Huron arrived in ballast, and tied up at pier 25-26. Most Canadian Great Lakes ships go into a form of hibernation called winter layup, but for many it is a time of intense maintenance and repair work, sometimes extending over several months. 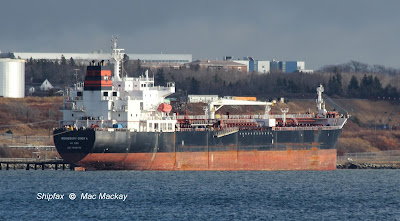 The tanker Ridgebury Cindy A after returning to Imperial Oil December 30, tied up at number 3 dock, then today went out to anchor. It did not appear to take bunkers and is due to sail at midnight, very much in ballast.

A new arrival at Irving Oil's Woodside terminal is the handymax tanker STI Wembley, part of the Scorpio Tankers Pool, headquartered in Monaco and arrived from Ijmuiden, Netherlands.

Built by Hyundai, Mipo in 2014 it measures 24,162 grt, 38,734 dwt and looks quite different from the usual Korean built mid-range tankers. It is an ice class vessel with a full width bridge structure. This is the second overseas arrival At the Irving terminal, both have been from the Netherlands. The first was Energy Panther which delivered a partial cargo October 22.


Also arriving, but too late for a photo,  Atlantic Sea is still missing its starboard anchor.