The bright red Danish tanker Hafnia Crux arrived at Imperial Oil this morning from Antwerp, Belgium. (So Irving Oil is not the only company importing refined products from Europe.) Tankers come in all colours, but this one is certainly about the brightest red available - and there is a reason for it. 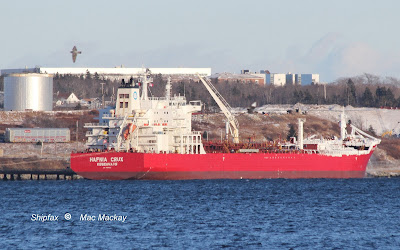 The ship was built by Guangzhou International in 2012 for Lauritzen Tankers as Freja Crux. In 2014 when Lautitzen decided to get out of the Medium Range tanker business, they sold this ship (30,241 grt, 52,550 dwt) and nine other similar ones to Hafnia Tankers, another Danish tanker operator. Lauritzen instead chose to concentrate on gas carriers and drybulk.  Rather than repaint the ship entirely, Hafnia just painted over the Lauritzen name and kept the bright red.

The red colour goes back to Lauritzen's specialization in navigating northern waters. They chose the bright red colour for the highest visibility in arctic conditions. Even in clear weather, red proved to be considerably more visible over distance than other colours. (It is also the principal colour of the Danish flag.)
Their first polar class vessel Kista Dan was built in 1952, and adopted the red colour, first with lifeboats, then with the crows nest and mast and finally with the entire hull. It later became the Canadian sealer/researcher Martin Karlsen in 1967. 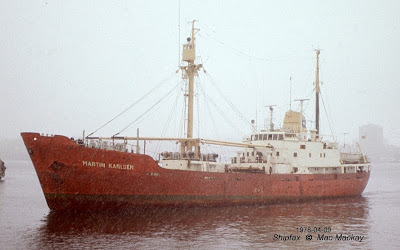 Despite heavy snow, Martin Karlsen (ex Kista Dan) is still visible as it returns from the seal hunt in April 1978.

Lauritzen pioneered winter navigation on the St.Lawrence River (much to the displeasure of Halifax) when the Helga Dan arrived in Quebec City on February 13, 1959. It was the first commercial ship to arrive from Europe in winter. (It received ice breaker assistance and aerial ice surveys, which was the bone of contention. That taxpayer's dollars went to support St.Lawrence ports for winter navigation at the expense of Halifax and Saint John was a political issue for many years thereafter.) 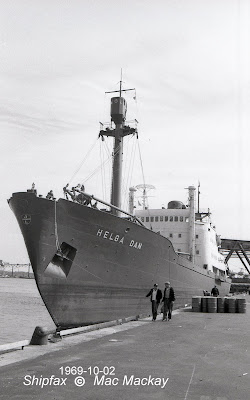 Helga Dan arrives at Pier 9 in 1969 on a general cargo run. The oil rig Sedco H is under construction at Halifax Shipyards in the background. The ship has an ice reinforced bow, and heated crows nest among many other features to permit navigation in ice.

Helga Dan again made history in 1962 when it arrived in Montreal on March 12. In 1964 it arrived there January 4 and in 1965 on January 1.Since then Montreal has been deemed a year round port for suitably equipped ships.

Founded in 1884, the J.Lautitzen companies have been active in many shipping sectors. They were a very large reefer operator for many years and have been in and out of tankers in various ways. With a large exposure to the drybulk sector they were hard hit by the (continuing) 2008 economic slow down, which prompted them to sell the very new tankers such as today's caller Hafnia Crux.