Nolhanava - still sharp, and other traffic

The ConRo feeder ship that links Halifax with St-Pierre et Miquelon is still a striking sight, even after eight months of  weekly service. Nolhanava is unmistakable, for it resembles no other ship in shape and colour.

It arrived in Halifax Thursday evening and anchored during a snow storm with blizzard conditions. Today, while waiting for its customary berth at pier 36, it showed off that form and hue in bright sun.

Built in 2000 in Constanza, Romania, as Shamrock, the 4654 grt ship was refitted in China in 2015-2016 with an exhaust gas scrubber system and acquired its elaborate paint scheme. It arrived back in Halifax in June 2016 and resumed the St-Pierre service that it was built for. As Shamrock it had operated on the run from January 2001 for only three years before it was sold and sent to the Caribbean. It returned to Halifax in April 2015 and resumed it original service until September 2015 when it sailed to China for the refit.

Also anchoring over night in Halifax was the Canadian general cargo ship Evans Spirit. The ship was en route from Baltimore to Sept-Iles and put in for shelter. It sailed early this afternoon - skillfully eluding this photographer.

There are lots of photos on the net however: https://www.google.ca/search?q=evans+spirit&biw=1205&bih=719&source=lnms&tbm=isch&sa=X&sqi=2&ved=0ahUKEwjy3ema2YbSAhVB7CYKHU5VAH0Q_AUIBigB

It was built in 2007 by KNS Delfzijl, Netherlands (on a hull built in Turkey) as Spavalda for Italian owners. McKeil Marine bought the ship in 2015 and named it after company founder Evans McKeil, a Nova Scotia native. As Evans Spirit it has been put to work carrying aluminum ingots out of Sept-Iles, but is also fitted to carry bulk cement. Its shallow draft allows it to call in ports that other ships can't reach. Tonnages are 9,286 grt, 15,026 dwt.  A sister ship, named Ardita has also been acquired by McKeil Marine and will be operating under foreign flag for a time, but is expected to become Canadian later this year. McKeil has recently been awarded a major cement hauling contract on the Great Lakes, which it is expected to serve.

Arriving this afternoon, CCGS Corporal McLaren M.M.V. still had some traces of snow and ice on it from last night's storm. Built by Halifax Shipyard to a Damen design, it was completed in October 2013 and is based in Halifax. 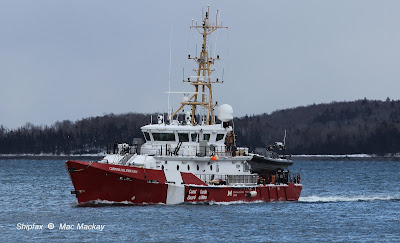