Icy calm before the next storm

The port was moderately active today as ships tried to catch up on time lost due to Thursday night's snow storm. Oceanex Sanderling and Nolhanava shared pier 41 for a change (the pier 36 crane must have had a problem) and Maersk Palermo was at pier 42, so Halterm had a busy day.

The veteran Atlantic Conveyor worked at Fairview Cove, and on leaving still had a thin ice coat which she arrived with.

Still soldiering on well after her retirement date, due to the late deliveries of new ships, Conveyor and fleet mate Atlantic Cartier will almost certainly have to be replaced this year.

Chebucto Pilot has a heated deck for safety*, but can still accumulate some ice in -12C daytime temperatures. 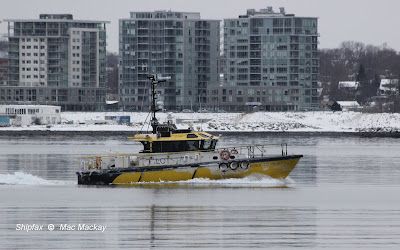 At Imperial Oil the High Pearl was also showing a bit of ice which she gathered on her trip up from Beaumont, TX. 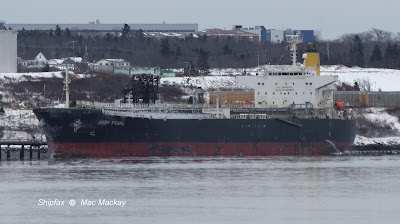 Operated by d'Amico Tankers, DAC of Dublin, Eire, the ship is registered in Singapore to Blue Wake Shipping Pte Ltd. In a bit of a break from the endless sausage links of Korean built tankers, this one came from Iwagi Zosen in Iwagi, Japan in 2009. It has typical Mid Range tanker dimensions of 28,813 grt, 48,023 dwt.

*Addendum:  The boat was built with heated deck and heated handrails to prevent the accumulation of ice. I am relaibly informed that this system has not functioned for some years, and there is no plan to repair it...
Posted by Mac at 8:11 PM