Although Autoport has few walls, the title is indicative of the current situation in Eastern Passage. The facility is stuffed with cars, mostly European, and more are on the way.

California Highway has its ramp up and is preparing  to sail from at Autoport. 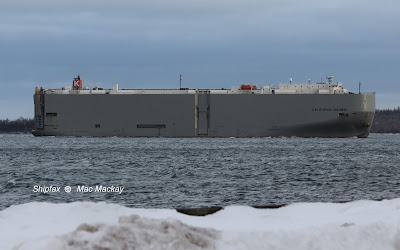 Less than 24 hours after yesterday's photo, the ship is outbound again.

As mentioned yesterday, California Highway arrived in the afternoon and in a little less than 24 hours sailed again, depositing an unknown number of autos and perhaps other vehicles. All the shoreside space was jammed and there were cars as far as the eye could see in the hinterlands behind. It is also understood that other vacant land nearby is also in use. A normal unloading schedule wold be about 8 to 12 hours, so the extra time was likely needed to ferry cars to remote destinations in the port. 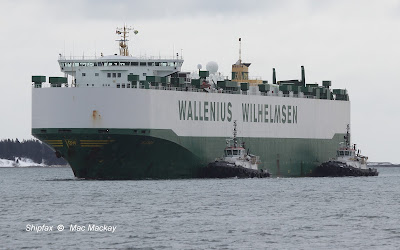 Arriving on the Halifax side at noon time another ship, Mignon, spent a few hours at pier 31 offloading some machinery, but was ready and waiting to move over to Autoport as soon as the berth was clear again. 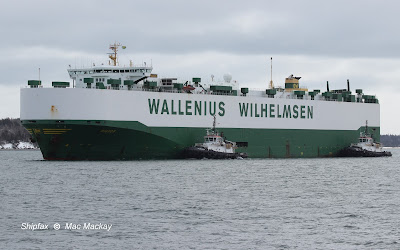