A veteran tanker has been sold and has left Canadian registry for an as yet unknown flag of convenience.
Thalassa Desgagnés has been a fixture on the Great Lakes, St.Lawrence and east coast as a dedicated asphalt / black oil tanker since 1993, and thanks to its most recent owner, has outlived many tankers of the same vintage.

Built in 1976 by Ankerlokken Verft Glommen A/S in Frederikstad, Norway, as Joasla, the ship is ice strengthened and double hulled with cargo heating coils. It became Orinoco in 1979 for Swedish owners, then in 1981 it was renamed Rio Orinoco and flagged in the Cayman Islands.

On October 1990 while inbound in the Gulf of St.Lawrence with an asphalt cargo, it experienced engine trouble and anchored off Port Menier, Anticosti Island. It was unable to maintain the anchorage and drifted ashore October 16. The crew were evacuated by helicopter, and the ship was feared lost.

However the ever resourceful Desgagnés recognized an opportunity, and on a "no cure / no pay" basis salvaged the ship the following spring and summer. The asphalt cargo had solidified, holding the ship in place and preventing major pollution. Re-liquefying the cargo to lighten the ship for refloating was  accomplished using barge mounted boilers. The lightened ship was then towed to Quebec City arriving August 23, 1991 and laid up  until the salvage claim could be settled. 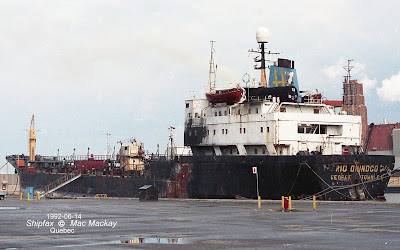 Still showing signs of recent distress, Rio Orinoco awaits its fate in Quebec City. Note the large tank on the upper deck adjacent to the funnel - part of the salvor's equipment. 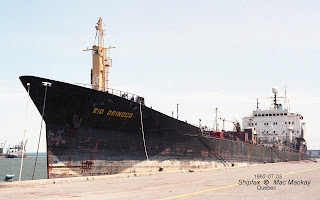 In early 1993 Desgagnés acquired ownership, renamed it Thalassa Desgagnés, and began the  process of rebuilding the ship. It went into service in early 1994 and formed the basis for the Desgagné subsidiary Pétro-Nav Inc. It was so thoroughly reconditioned that its life was extended dramatically.

It called in Halifax numerous times with asphalt, but also with Bunker C fuel for the Nova Scotia Power plant at Tuft's Cove. It also carried heavy fuel from Halifax when Imperial Oil's refinery was in operation. 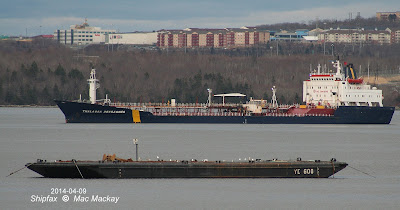 Safely at anchor in Bedford Basin, Thalassa Desgagnés had arrived the day before in a storm.
Due to its ultra low freeboard, the pilot could not board the ship safely until it was inside the shelter of Meagher's Beach.

The Pétro-Nav fleet has expanded dramatically and is continuing to do so. The eight ship fleet will expand with four new multi-fuel asphalt tankers under construction in Turkey to be delivered starting this spring. The first, Damia Desgagnés, a 11,978 grt, 15,100 dwt ship will be able to use LNG, marine diesel or heavy fuel for its main engine.

Thalassa Desgagnés had been laid up in Montreal last year in anticipation of its replacement. It has now been renamed Asphalt Princess and at an age when most tankers would have been scrapped, it will resume service for new owners offshore. It was 17 years old when it was declared a total loss, but has put in an added 24 years of service since then - a remarkable story.