Back by popular demand - a follow up to my post about last weekend's trip to the South Shore - more particularly Liverpool.

Liverpool is the home of Mersey Seafoods Ltd, founded in 1964 by a local dentist, the late Dr. Bill Murphy, and now one of the important seafood companies in eastern Canada.

Although it started small it grew by expansion and acquisition (too big a story for this brief post) but now has boats fishing as far north as Greenland.

This is a follow up on the one boat featured in last week's post, Richmond Odyssey. Built for Richmond Fisheries (1983) Ltd of Petit-de-Grat, NS,  it was the built by Pictou Industries Ltd. Three more trawlers of the same design were built by Georgetown Shipyard Inc in Prince Edward Island and registered to sister company Usen Fisheries (1983) Ltd. 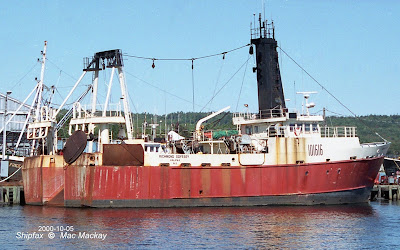 Richmond Odyssey after some hard fishing, was ready for a paint touch-up. Mersey keeps their boats up very well, so this one didn't look this way for long.

It took government persuasion (i.e. subsidies) to convince Booth Fisheries of Chicago to expand beyond their fresh water home on the Great Lakes and to invest in deep sea fishing in about 1959. They established plants in Petit-de-Grat (on Ile Madame on the southeast corner of Cape Breton Island) and in Fortune, Newfoundland. They had a fine fleet of Dutch built side trawlers but in 1974 they threatened to pull out of Petit-de-Grat and concentrate their activities in Fortune. All levels of government stepped in and purchased the plant and saved the hundreds of jobs ashore and afloat that were the  lifeblood of the island community. After rebuilding the plant the operation was sold to Usen Fisheries.

The Petit-de-Grat plant (in Richmond County) was incorporated as Richmond Fisheries (1983) Ltd and a sister plant in Souris, PE operated as Usen Fisheries (1983) Ltd. (I believe the Fortune plant was also part of the deal, but I can't be certain).  Boston-based O'Donnell-Usen Fisheries was one of the largest independent sea food processors in the US and became th owners. They had been established in Prince Edward Island for several years before.

The fleet of trawlers, now becoming obsolete was to be replaced and in 1988-1989 the four new stern trawlers hit the water. Disaster soon struck with the declaration of the cod moratorium in 1992 and a fire which destroyed the Souris plant in 1993.

All four of the draggers (stern trawlers) ended up in Liverpool, NS, in the hands of Mersey Seafoods, and tied up at Steel and Engine Products Ltd.

The first of the four Georgetown trawlers was Souris Lady, completed in 1988. I have been unable to trace its subsequent history. After several years laid up in Liverpool it was likely sold abroad and may still be sailing. 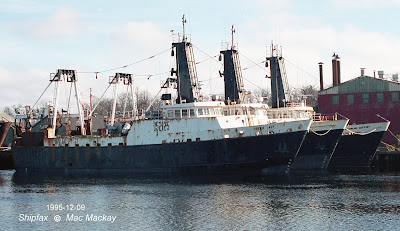 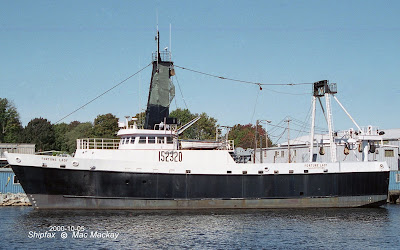 Fortune Lady painted up for Mersey and still rigged as a stern trawler. 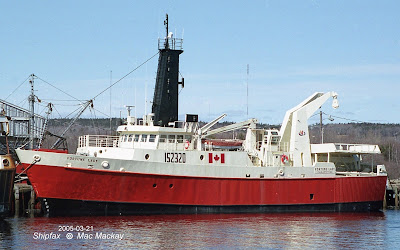 Post re-build as a unique scallop dragger, still works over the stern.

Cardigan Lady was the third and last of the sisters built by Georgetown, and was also delivered in 1989. In mid-September 2012 it appeared in Metéghan, NS for a complete refit. It was renamed Antonio H under Panama flag and its Canadian registration was closed September 18, 2012. I have been unable to trace its subsequent movements either.